Review of: Killology at the Royal Court

“There is an instinctive revulsion against taking a human life.” Killology writer Gary Owens knows this, and he is not afraid to use it against his audience. At its most revolting, Killology is an ear-plugging, hair-pulling, seat-leaving affair.

Paul (Richard Mylan) is a designer responsible for a new video game that rewards players for torturing their victims. Davey (Sion Daniel Young) is a bullied kid and Alan (Seán Gleeson) has just broken into a man’s house. They relate their tales through a series of monologues that bounce between the three characters, eventually revealing the links between them. Owen invests just enough time in making the characters likeable before using that to throw body blows with a series of horrific, precisely-described events. To say he “kicks the dog” would be an understatement.

Richard Mylan’s Paul becomes the only relief from dread and misery. Though he portrays the kind of arrogant prick that is natural to hate, the vulnerabilities baked into the character and Myland’s easy delivery injects some much-needed comedy into the otherwise dark show.

That darkness extends beyond the subject matter. The stage itself is black; the only ornamentation being piles of black wires with more hanging from the ceiling. A single spot illuminates the speaker. Later, certain scenes are illuminated from the back, like with floodlights on a football pitch. It’s abstract and stripped back, but it works. 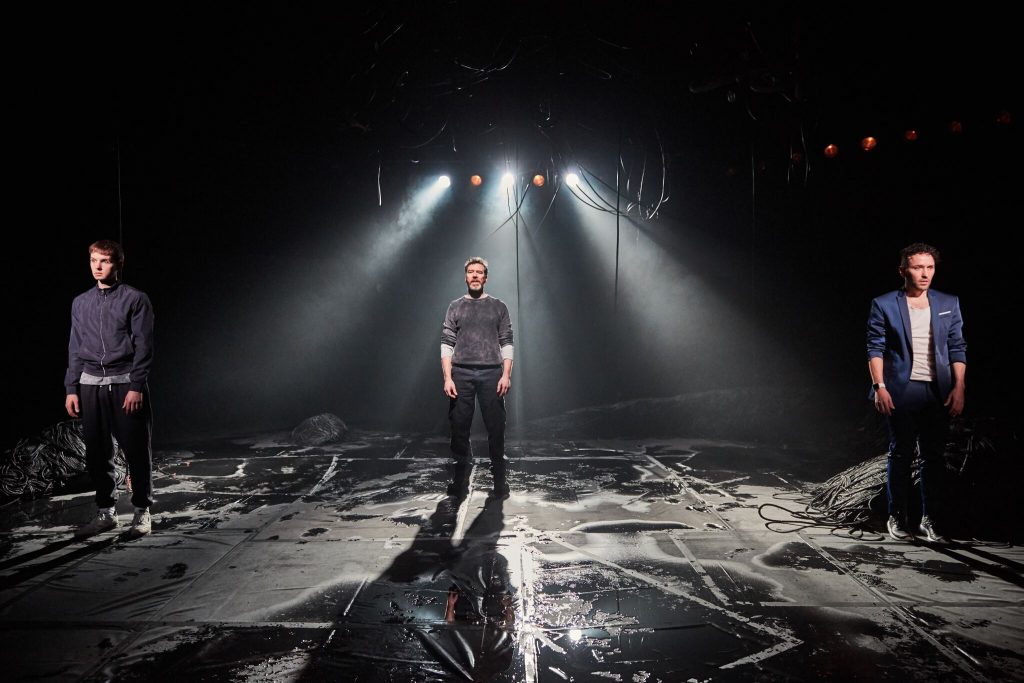 In Killology’s second act, I expected it to go for the kill. After wearing me down in the first, surely Owen would finish with some uncontestable expression of humanity’s capacity for cruelty. Instead, the show feints, revealing that it is less about depictions of violence than the relationship between fathers and sons. As the show reaches its conclusion, it becomes quieter, more introspective.

I was disappointed, even angry. For that conclusion, the parade of brutality that is the play’s first half seems at best, unnecessary, and at worst, sadistic. It may be that the show’s final act of violence is intended as the proof of the point: video games incite violence, done. If so, then it’s failed to convince in this instance. If not, then the theme of violent media just disappears for the last 20 minutes, unresolved.

The ending isn’t badly done in itself. There are secrets it deftly reveals, and the difference between its three characters comes into focus. The father/son theme gains prominence slowly, rather than appearing suddenly, and it does work to excuse another all-male cast.

But Owen never delivers the headshot. So while Killology’s most striking feature is its awfulness, that is more an obstacle than a literary device, and one that’s only just worth overcoming.