Review of: Love In Idleness at the Apollo Theatre

Love in Idleness was a wonderfully novel addition to the West End collection.

It’s astounding to think that Terrence Rattigan’s Love in Idleness hasn’t been seen on a London stage since it originally debuted in 1944 – magnificently and deftly crafted by the writer to lap up the laughter with each finely poised beat, a precursor to the likes of Ayckbourn or Zeller with its social farce and finely tuned characters each bouncing off one another with the requisite inertia. But from a historian’s perspective it makes complete sense – a show subtly mocking left wing idealism a year before the country underwent the largest left slide of the twentieth century is one that becomes outdated almost immediately, and would have felt entirely misplaced during the rest of that decade, a time during which we saw the introduction of a health service, more sufficient living wages and the conception of the welfare state, all instigated by a certain Mr Beveridge and fulfilled under the watchful eye of Mr Attlee.

As such, it comes as a sad truth that it feels so pertinent now – as left wing idealism more explicitly gives way to a more pragmatic dogma. We are introduced, through Rattigan’s careful construction, to Olivia Brown (a near pitch perfect fit for Eve Best), a widowed wife turned lover of a Sir John Fletcher, (Anthony Head, with a near-flawless Canadian drawl of a voice), the Minister for Tanks in the war, each welcoming back to Fletcher’s (and, now, Brown’s) home Brown’s son Michael (Edward Bluemel) after four years evacuated to Canada. Michael, chock full of socialist leanings (though always quick to clarify that he isn’t part of the CP) is instantly repulsed by Fletcher, a scenario that puts the elder Brown in a rather precarious position. From there, as is always the case with these shows, hilarity ensues.

Trevor Nunn knows how to craft a scene, his style here completely unrecognisable to his much more stilted and perfunctory King John last year. He turns the prospect of a 150-minute wartime drama into a rollicking sparring session between each of the characters, all overseen by Best as she reacts in turn to the various tantrums and ploys enacted by Michael, displaying genuine woe and frustration as she, time and again, places family before her own happiness. Her frustration becomes the audience’s frustration, one that becomes all the more cathartic with the show’s conclusion. 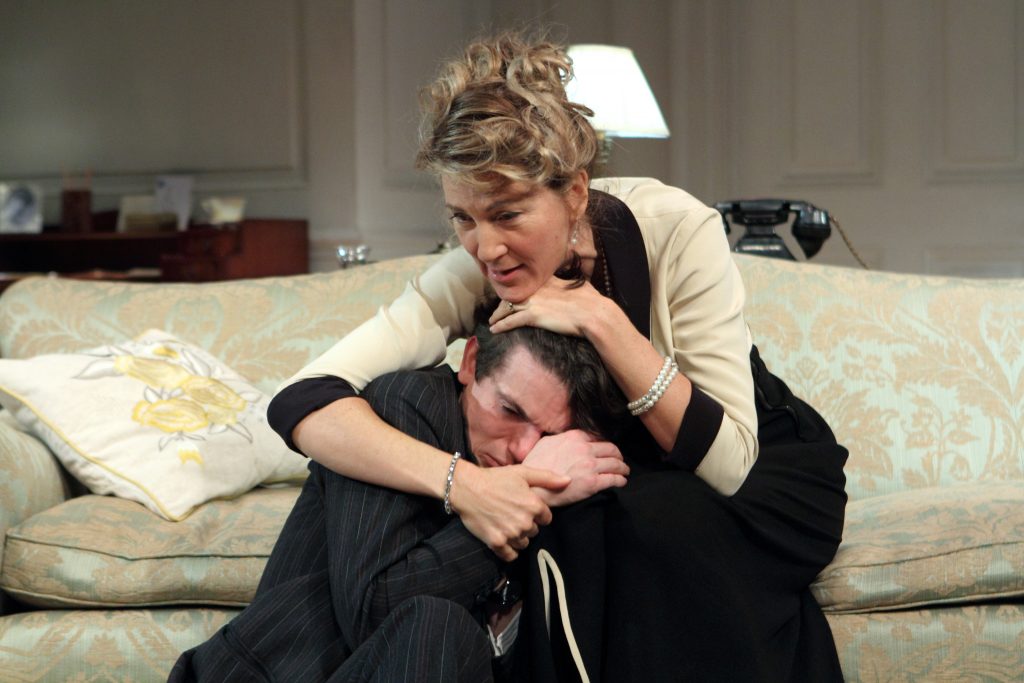 Stephen Brimson Lewis’s design bears all the hallmarks of a Menier run – shallow yet wide, a rarely shifting set that works as well as necessary. The introduction of the projection, providing relevant tidbits into wartime Britain (as well as the rapid crescendo of optimism from 1944 onwards) was a suitable way to break up what would be lengthy scene changes, particularly the inclusion of Beveridge’s report. Indeed, the show felt almost like watching the birth of New Labour – Fletcher admitting he had quite strong left leanings, only to then go on to reiterate the importance of privately owned industry and the vital role nepotism seems to play within it.

The show has a few lagging moments, especially in a final scene that only delivers the goods towards the end, but overall Love in Idleness was a wonderfully novel addition to the West End collection.