Review of: Attrape Moi (Catch Me) at the Underbelly Southbank

On something of a broader point, the Underbelly is a marvellous addition to the Southbank’s summer cavalcade of cultural experiences. The small assortment of stages and huts is like a perfectly transplanted slice of the Fringe, preserved and transported southwards for those of us too shackled to a day-job to spend any meaningful time north of the border. Attrape Moi epitomises this attitude – a freewheeling dose of summer magic, portrayed with exuberance and, fundamentally, a chunk of raw talent.

Flip Fabrique, the Quebecois circus troup (fondly described as the cool new kids on the block in a city already dominated by the likes of Cirque du Soleil or Cirque Éloize) make a veritable splash next to the Thames in a show that, while never trying to shatter the status-quo, delivers all the makings of a perfect evening’s entertainment. The six performers, dressed in outfits resembling a hipster summer fete c. 2013, take us through their day, from afternoon recreation, dusk-melancholy, night time anarchy, and morning-driven energy. All seen through a variety of different circus skills, the key strength here lies in their ability to constantly push onto the next trick – the next act, catching our attentions just before they seem likely to drop. The other vital element here was the differences in tone – some acts capable of being hauntingly quiet, beautiful in their understated-ness, while the playful energy of others provided the ideal counterweight on the see-saw 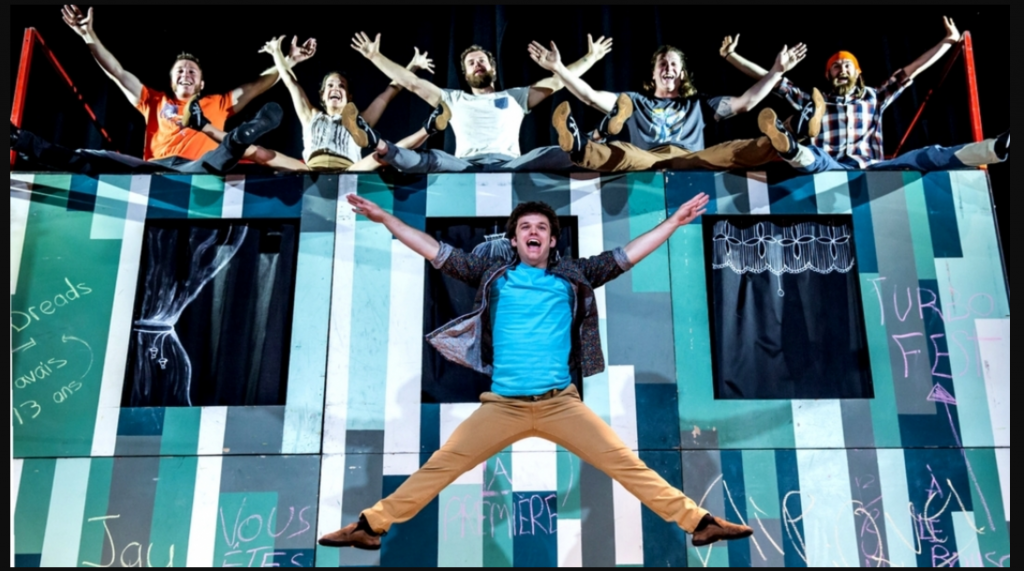 A neat trick, only manageable for a troupe packed full of excellence. Each had a diverse range of talents, be it from juggling, trampolining or, as it turns out, performing aerobic acts on giant red inflatable exercise balls. The novelty, when it appeared, was a refreshingly humorous experience. Perhaps this talent was more immediate from the front row – it would be interesting to see how the show seemed from the back of the large Belly stage.

Some of the clowning and comedic skits felt slightly less polished than the acrobatics, but the show was nevertheless laced with an underlying playfulness – the members of Flip Fabrique able to assume roles of background chorus where necessary and let others take the spotlight. The main draw here was therefore the cohesion and atmosphere of camaraderie between each member of the troupe – we see them go through the hour together, hopping into beanbags and slurping coffee together. Definitely worth the visit if looking for a nice summer on the river.