Review of: Babette's Feast at the Print Room, Coronet

The play transports the audience somewhere far away, whispers them something they didn’t know before, and takes them back in a state of baffling bliss.

Performed in the beautifully quirky venue that is the Print Room, Babette’s Feast is a surreal and misty story, halfway between a Brothers Grimm’s fairytale and the film Chocolat. In its combining a narrative dimension with a dramatic vocation, the play transports the audience somewhere far away, whispers them something they didn’t know before, and takes them back in a state of baffling bliss.

The story has a hazy start and a suspended ending, which gives the plot a somewhat obfuscated texture. The core of the play is a small, pious Norwegian village, where all that matters is simplicity and purity, and the life philosophy is leading a morally upright existence. Two sisters, Martine and Philippa, living in a small yellow house, “there is no one in the world they wouldn’t welcome”. And yet, a captain courting Martine and an eccentric opera singer who teaches Philippa are gently pushed away. It is only a third visitor, Babette, escaping from the civil war in faraway Paris, who will bring some real novelty to the village. 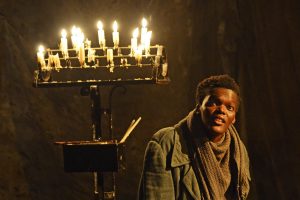 Originally a short story by Karen Blixen and adapted to the stage by Glyn Maxwell, the play touches upon (more caresses) several topical themes. First and foremost, the notion of migration and encounter with the unknown, which runs through the whole story. In the austere village, characters welcome with scepticism and apprehension the arrival of Babette – hilarious is the reaction of Kara, an old lady who felt very much like a xeno-suspicious Brexiteer.

The community is recalcitrant to be challenged by the new and unfamiliar, at least until Babette introduces the peasants to the luxurious (and immoral) pleasures of fine dining. Pleasure and enjoying life are another key aspect of the story. The scene of the village feasting is heart-warming, as people finally let go their moral strictness and realise not only that “there is grace in the universe”, but that such grace is infinite, and to deprive one’s selves of it is pointless, and possibly even contrary to God’s will (“How you will enchant the angels!”, Philippa tells Babette at the end of the feast). 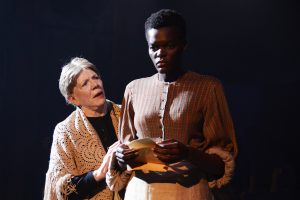 Babette is a driver of change because she is an artist, and art is quintessentially enrichment and grace in itself, not to be shun away from, but rather to be enjoyed. However, in the last few moments of the play, we understand Babette’s real intent: her lavish dinner was not done out of altruism, but rather self-interest: the ending makes Babette look like a self-absorbed aesthete, merely interested in the pursuit of her personal fulfillment as an artist, rather than motivated by the wish to enrich people’s lives. The ending feels a bit rushed and leaves a few loose ends, causing the message(s) to hang in the air rather than being fully delivered.

On the other hand, I felt all acting was characterised by one common element: actors deliver their lines with assuredness and tangible pleasure. Everything is measured, balanced, agreeable to hear and see. A special mention is deserved by the histrionic opera singer Achille Papin (Henry Everett), and to Babette herself (Sheila Atim), who exudes charisma and mystery as the Parisian guest, but also compellingly narrates the first half of the story. Among all members of the cast, wisely orchestrated by director Bill Buckhurst, dominates a sense of harmony and amalgamation, rarely seen on stage. 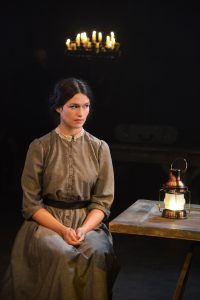 Aside from a talented cast, the main element of the play is its aerial dimension, which proves also its main weakness. Vaporous as the beautiful lightning design by Amy Mae, Babette’s Feast results in a collation of sparkling flashes among a misty cloud. Moments of suspension and contemplation easily slip into impalpable and almost unmemorable instants. The “unbearable lightness” of the show at times runs the risk of vanishing much like it has appeared. Nevertheless the risk is worth taking, if anything for the gentle profundity the play occasionally manifests.

Babette’s Feast runs at the Print Room Coronet until 3rd June. You can purchase tickets from their website or by calling their box office at 020 3642 6606.