Review of: The Who's Tommy

A diverse and inclusive staging of an epic rock opera musical that is accessible to all.

I have to admit, I had never heard of the musical and was expecting a story built around the greatest hits of The Who – so I was glad to discover it wasn’t anything like I had imagined. The musical has its roots in The Who’s fourth album, ‘Tommy’, a rock opera concept album that chronicles the life experiences and relationships of a deaf, dumb and  blind boy. Those who have listened to the 1969 album, watched the 1975 Ken Russell film and seen a live staging will know that there are plot differences. What makes this version particularly special is that Pete Townshend’s direct involvement has meant two new songs were written exclusively for this touring production. 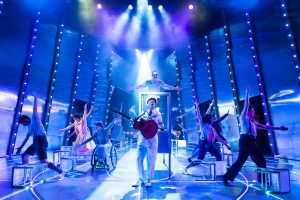 Walking in to the auditorium immediately feels like a rock concert setting, with UV blue lights rotating around; and projections on a large piece of gauze that pulls away to reveal a larger than life set made up of steel panelled walls lined in dressing room light bulbs. One of the most recognisable of The Who songs is ‘Pinball Wizard’ and it was delivered in a number filled with multi colour magic thanks to Arnim Friess’ lighting and Neil Irish’s set design that complimented each other stunningly. They brought the stage to life with their light up chairs and LED strips floors and were equally matched by Mark Smith’s colourful and bold choreography which flowed seamlessly into one with the British Sign Language interpretation throughout. 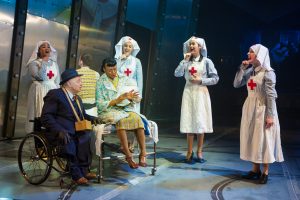 The show opens in present day with projections of tv monitors showing the portrayal of disability in the media and news stories including Trump’s infamous mocking of a disabled reporter – before we are transported to 1940 where it all begins. William Grint is captivating  throughout as Tommy, powerfully showing the guilt he carries after witnessing his father’s brutal death while also giving one of the most uplifting performances in the number ‘I’m Free’. His father Captain Walker (Max Runham) is the only presence that filters through the noise of the world around him which Grint and Runham delivered with real poignancy. The unsavoury characters make for uncomfortable viewing and listening as they represent the dark side fuelled by sex and drugs. Uncle Ernie (Gary Robson) performances in ‘Fiddle About’ and ‘Tommy’s Holiday Camp’, a creepy Pinocchio Treasure Island style number are particularly harrowing through the lens of a light hearted character approach. A special mention must go to West End veteran and original cast member from the 1979 production, Peter Straker as the Acid Queen whose drag act presence was a force of nature with vocal range to match. Equally impressive was his accomplice Hawker played by Natasha Lewis who belted out numbers with great power, both gave phenomenal performances. 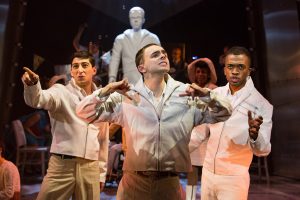 Robert Hyman’s musical direction delivered rich melodies that were supported with audio description and captioning. The influences of the American Deep South in the hymn like song ‘Christmas’ was powerful in highlighting the persecution of Tommy and there were beautiful harmonies from the actors playing the Nurses in ‘It’s a Boy’ number which sent shivers down my spine. The disabled actors and able bodied actors were so in tune with one another through out and delivered a show of such high quality that was accessible to all. Kerry Michael has directed one of the most diverse and inclusive musicals I have ever attended and we need more of this in the mainstream ! 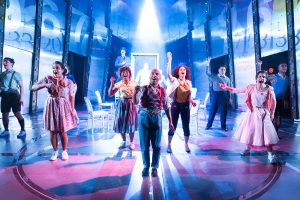 The Who’s Tommy will be continuing its run at the New Wolsey Theatre in Ipswich from Wednesday 5th April until Saturday 15th April at 14.30 and 19:45. You can book your tickets from their website https://www.wolseytheatre.co.uk/shows/tommy/ or through their box office on 01473 295900