Review of: It’s Not Yet Midnight… at the Roundhouse

It’s Not Yet Midnight… contains moments of memorable acrobatics, but put together in a slightly awkward and far-fetched way

What does contemporary circus have to offer to our time? Should it aspire to provide genuine amazement, remind us of the incredible possibilities of the human body, or even dare to change the world? It’s Not Yet Midnight… attempts to do all three, and while in some ways it succeeds, in others it has still room for improvement. 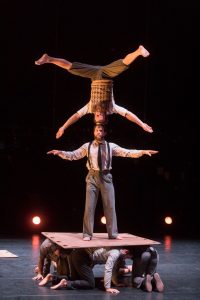 The one-hour show is an impressive array of acrobatic tricks, created by Compangie XY. Even half-way through the performance, when there seems to be no more body surfaces on which to balance people, or no more equipment with which to lift people up, Compagnie XY have still some aces up their sleeve: without spoiling too much, the show features human towers, head-standing, swings, boards… among other things.

It’s Not Yet Midnight… is meant to be a performance made by, and about, large numbers of people. It is truly a work of collective art, on a number of levels. XY’s acrobats work as one, big body: they stand, collapse, rise up again, jump, spin together. Almost every action is imbued with fluidity and the collaboration between the artists is virtually perceptible. As well as commendable as a value in itself, the notion of collectivism is carried further and made inherent part of the show. It acquires a poetic meaning, made explicit in a final address to the audience: in acrobatics, as in life, it is crucial to keep alive solidarity and mutual awareness, staying tuned-in to each other, and be always ready to support. Declaimed at the end of the show, the message of the performance resonated even louder, and I’m sure the audience could not but agree with the words of the XY spokesperson.

While the numerous tricks and the overall message of the show are undoubtedly remarkable, there are several questionable elements, preventing the performance from soaring up to fulfil its full potential. It’s Not Yet Midnight… gave the impression of being attempting too much, in particular when trying to incorporate different art-forms into the show. The decision to laugh before the most difficult numbers, for instance, was a puzzling one. Instead of resulting in contagious laughter among the audience, it created a sense of alienation. The same applied to a few random moments of clownery, when tools are purposelessly brought on stage, or when individuals start galloping at random. Sadly, this was not as funny as it seemed to be for Compagnie XY. 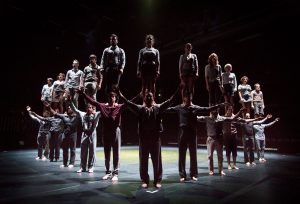 Dancing also proved a double-edge sword. On the one hand, it provided a nice stage-filler, giving the audience an additional element to watch in-between tricks, but at the same time it resulted in rather “heavy” moments, contrasting with the soaring and jumping taking place on stage. A few mo
ments of dancing off-beat would not have been a problem, had the choreographies been more challenging. And even the idea to have a member of the troupe getting every single step wrong was fun until it became pointless.

Animated by verve and energy, the show gives the impression that such a vitality is not always channelled in the most productive way. A few moments of amazing tricks glued audience to their chairs, but at times we were are left estranged, rather than engaged. In a show that prides itself on being a piece of collective art, the audience should have been taken more into account, more involved, and more intrigued. It’s Not Yet Midnight… contains moments of memorable acrobatics, but put together in a slightly awkward and far-fetched way.

It’s Not Yet Midnight runs Tuesday to Sunday at 19.30 at the Roundhouse, until Sunday 23rd April, closing with a 17.00 show. Tickets can be purchased online on their website.