Review of: 46 Beacon at the Trafalgar Studios

46 Beacon joins a lengthier and lengthier list of what can most easily be categorised as ‘orthodox homosexual theatre’ – shows that tackle sexual anxieties of white men in a society where, though persecution can exist, it is never seen as a challenge or dangerous trait. The concept is, by 2017, somewhat worn – eclipsed entirely by the very important and pressing body of work that came out of genuine reactions to the AIDs crises and the resulting performances that came from these. As a result, plays like Beacon 46, in the same vein as the likes of Boys in the Band or even last year’s Four Play at Theatre503, becomes much more of a tiring affair – dabbling with issues that no longer seem all that engaging.

The play is stuffed with liminality – almost every issue in flux or facing transformation. We find ourselves in the Boston hotel room (not a permanent residence) of one Robert, a failing actor on the cusp of raging beyond his prime. He is courting the youthful Alan, a 16-year old still toying with his own sexuality, uncertain if he will ever find something solid in his personality. From there the two embark on a lengthy discussion punctuated by a black-out (implying ‘sex-has-occurred’) before another lengthy conversation continues. A simple, A-B, before-after formula. Anxieties rush through the 90-minute runtime – Robert about his career and relationship, Alan about his life as a gay man.

Jay Taylor finds an intriguing Robert among the reeds here – a clear narcissist stubbornly trying to battle the impending end to an unfulfilling career. A worn character coated with a slick veneer of a supposed leading-man. Oliver Coopersmith’s Alan fares less of the two – youthful naivety and awkwardness created quite a stilted and spondee-stuffed interpretation of the character. 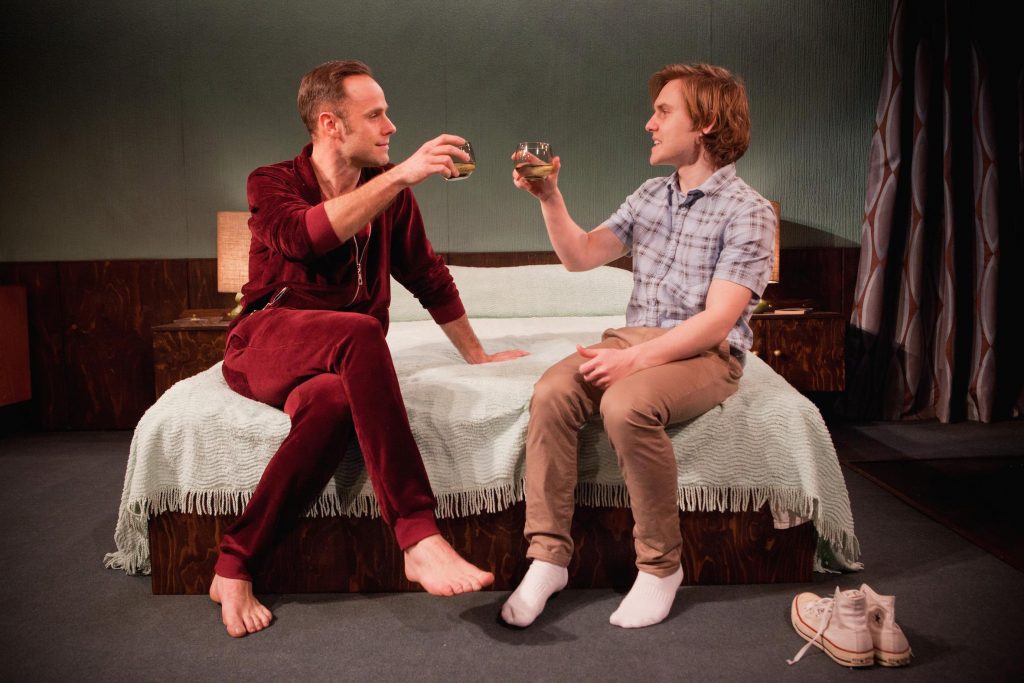 For all this, it is Bill Rosenfield’s script that lacks the punch necessary to go beyond the orthodox. The two individuals leap from concept to concept with seeming spontaneity, decisions are made without rational decisions (Robert asks Alan to go, one minute later Robert asks Alan to stay – no reason is given). Alan’s issues regarding his sense of acceptance felt rushed, entirely shoehorned into the second ‘part’ of the show while never hinted towards in the first. Some more treatment may well have been useful here.

Fundamentally however, the show simply never felt all that necessary. This is homosexuality before the AIDs crisis – an artefact, a distant memory that can be entirely undone by the slightest anachronism (the reference to Tinder, therefore, felt entirely forced. At least Boys in the Band made its historical underpinnings funny. This is a recitation of a story that has been done better elsewhere, and now just seems worn. Perhaps a reflection of the experiences and opinions of this reviewer, but the reaction seemed justified nonetheless.