Review of: The Miser

A brilliant combination of enthusiastic humour and nuanced text, this new production of Moliere's classic play is not to be missed!

Moliere’s much loved play The Miser details the life and household of Monsieur Harpagon, as his children Cleante and Elise secretly plot to marry suitors of their own choosing.

Sean Foley here directs an all-star cast, who work well as a cohesive group to bring this brilliant translation to life in an exuberant and engaging production. The physical theatre elements of the production are brought off in style by a large set, which is slowly crumbling throughout the course of the play. Strong costuming evokes the period and distinguishes the rank of characters well. Lee Mack’s costuming is particularly effective, featuring bottomless trousers, an outfit fashioned from dilapidated curtains and a multitude of hats to distinguish between his plethora of characters

Mack’s physical theatre prowess moves beyond just his costumes as he throws himself about the stage.  He does, however, primarily play himself in a manner akin to his popular show ‘Not Going Out’.  Whilst his timing and physicality thrive, and he brings out the best elements of the role, I can’t help but wish he was challenged beyond his usual remit.

The miser’s two children, played by Katy Wix and Ryan Cage, carry the production with their brilliant, unfaltering characterisation. Their respective speech impediments are a strong source of humor from the start of the play, and don’t impeach at all upon their quality of acting. The initial scene between these two, describing their heart-broken predicaments, is one of the most compelling of the production, drawing the audience straight into Moliere’s strange world of hyperbole. 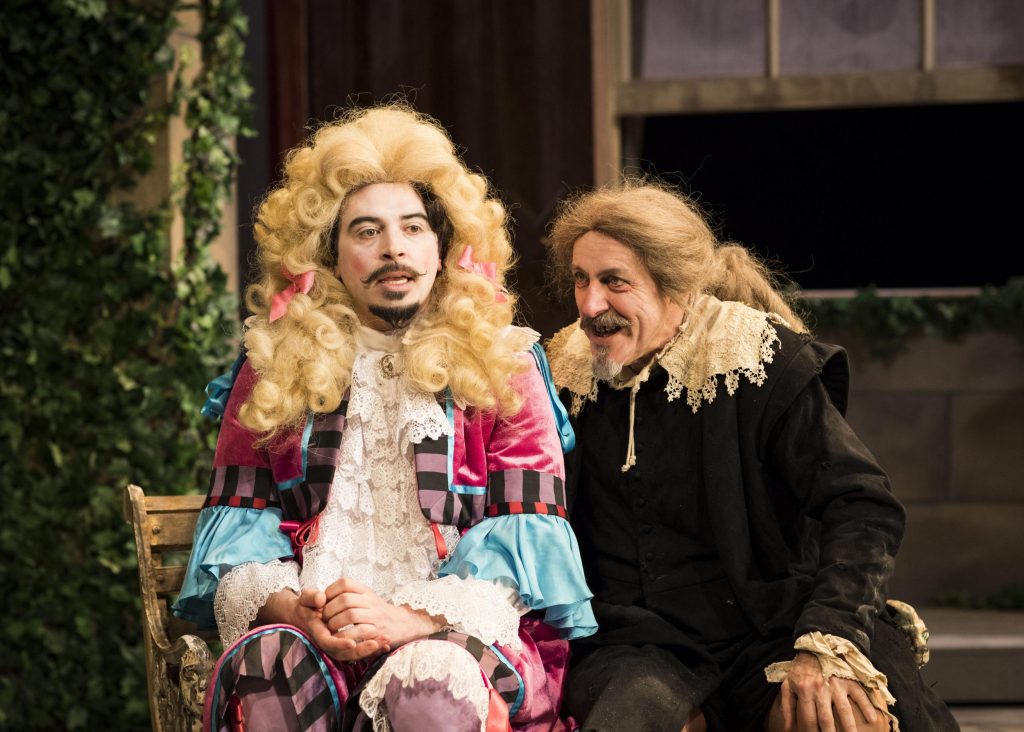 Whilst the first act maintains momentum throughout, the second (though shorter) it could be cut considerably. The green-house set felt geared to plot rather than character development, limiting space and constantly refocusing audience attention on the plot device of hidden gold. Having said this, Griff Rhys Jones’ protracted monologue which took place within this set was by far the most impressive piece of acting within the play. Whilst Jones is limited by the stereotypical nature of the character in act one (nevertheless bringing amusing physicality to the role), in this monologue he masterfully commands the stage, bringing Harpagon an unexpected element of vulnerability. Jones impressively managed to maintain this sense of depth through the series of physical theatre gags that took place over the course of the speech.

The modern references and wordplay of this translation, often consciously mistranslating the French, works well towards the overall comic effect of the play. References placing – or misplacing – the time period of the play are particularly effective, as is the willingness of all of the central characters to engage with the audience.

Whilst the central cast is strong, the peripheral characters felt somewhat token at times. The introduction of several characters in the very last scene of the play felt engineered for the plot, these characters appearing particularly one-dimensional, without any space to develop or express themselves beyond the strict remit of their structural function.

Whilst the music and occasional song in The Miser felt slightly at odds with the general style, these musical interludes injected vivacity and life into their scenes. The final choice to end the bows with modern music and dance was a brilliant decision, leaving the audience with a feel-good rush of adrenalin representative of the upbeat enthusiasm of the production.