A near-perfect modern interpretation of Hamlet. The use of technology and Nordic-noir-type staging makes this very current and helps to make the play very relevant.

There is an issue with changing the setting and context of great plays in an effort to make them more relevant and accessible – quite often the changes mean that much of the original brilliance is lost in the process. I am pleased to say that this is not the case with director Robert Icke’s production of Hamlet. Using a modern day Danish setting, drawing on the current fascination with Nordic-noir television, not only works perfectly, but gives fresh nuances to one of Shakespeare’s greatest works, without losing the fundamental analysis of the human condition. The success of this process is enhanced by an impressive set and some mesmerising performances – not least that of Andrew Scott as Hamlet.

From the outset, as palace security watch CCTV for the appearances of the dead king’s ghost, the modern update is excellent. The party settings allow us to see how Claudius (Angus Wright) has entranced Gertrude (Juliet Stevenson), and the use of live TV broadcasts demonstrates his manipulation of the people by urbane propaganda. This is not an old-fashioned scheming Claudius, but a modern political animal. The production may be one chunky-knit jumper away from a modern Scandi-drama, but we do get a hipster-like Rosencrantz, and that a woman plays Guildenstern suggests Hamlet’s declarations of love may be somewhat beyond the filial. There are other elements of interpretation that work in this context. The play within the play becomes a televised Royal Performance, allowing us to see the response of the new King to the action. The fight scene with Laertes becomes a reality spectacle that turn spectacularly tragic, with Gertrude’s act of drinking the poison meant for Hamlet here deliberate rather than accidental. 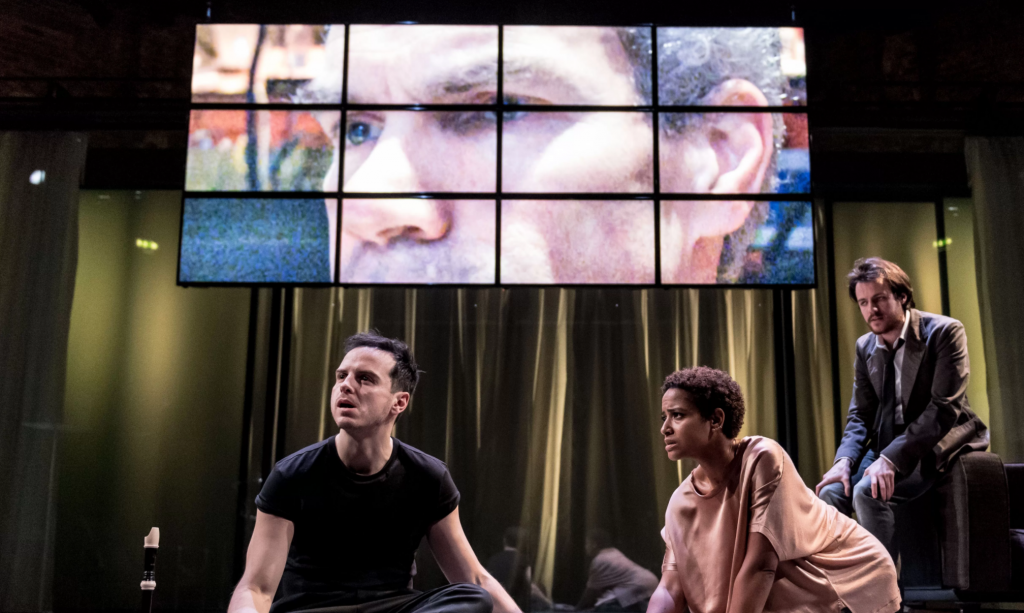 The staging is very well done through-out, with the first interval occurring as we hit pause after the king storms out of the theatrical event, and the reuniting of the dead protagonists at a macabre party allows us to see the full extent of the tragedy that we have witnessed. The use of music, much of which is by Bob Dylan, has a lyrical relevance that works, although perhaps distracts a little from the modern Danish feel.

The overriding memory for the audience, who rose as one to give a standing ovation (a very rare event at the Almeida) I suspect will, however, be the performance of Scott. At first his delivery seemed a little ponderous, but quickly this approach became perfect for a man articulating his thoughts about his very existence and the wickedness of man. There were moments of extreme and tortured angst that gave perfect modulation, which was also loaded with cynicism, holding us rapt throughout. It was also a very physical interpretation, with much chest thumping and falling to the knees – quite how he repeats a near -4 hour performance twice on some days is tough to comprehend.

The rest of the cast is none-the-less worthy of sharing the stage, with Juliet Stevenson delivering the performance you would hope for from an actor of her stature, and Jessica Brown Findlay exceptional in the difficult role of Ophelia – her journey from confusion, to devotion and then madness perfectly observed.

As ever, tickets to the Almeida are hard to come by, but for this it is worth camping outside in the hope of a return.