A classic farce filled with scandal and secrets that will have you roaring with laughter. One not to be missed !

This little known turn of the century French farce by Georges Feydeau originally titled Monsieur Chasse! has been brought to the stage in a new adaptation by the master of farce himself, John Cleese and translated by Anna Orford.  Bang Bang it certainly is, from the start we are whisked into a world of Parisian luxury and glamour during a time that was particularly celebratory of artistic culture. In a fairly large auditorium, an intimate atmosphere is still maintained with a thrust stage that boasts a lavish period home setting and I was impressed by how seamlessly the walls rotated in separate parts to reveal an equally beautiful change of room. David Shields’ attractive and cleverly designed set is in perfect keeping with the Beautiful Era known in France as ‘La Belle Époque’; a Golden Age of prosperity and innovation after the First World War. 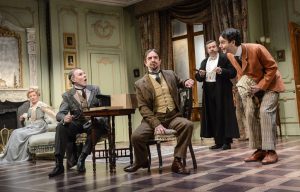 We first meet Leontine (Caroline Langrishe) who is sat stuffing gun cartridges, a moment seized upon with comical innuendo by her visiting lover Dr Moricet played by Richard Earl. Both are desperately trying to hide their relationship from Leontine’s husband Duchotel (Oliver Cotton) while also dealing with their own conflicts. Dr Moricet is the catalyst for the events that unfold as he plants the seed of doubt in Leontine’s mind about her husband’s fidelity for his own advantage, spurred on because she states that she only wants to be avenged by her lover if her husband cheats. Classic Cleese humour is peppered throughout this production but particularly so in the portrayals of Duchotel and Dr Moricet who characters are at times like a combined version of Basil Fawlty with Leontine in between them both like an exasperated Sybil.  The roaring laughter from the two men which at often times masked the awkwardness of their situation is totally infectious and had the audience in fits of laughter. Duchotel, who is seemingly oblivious to his wife and his friend’s conversational intentions because she has veiled it with a repetitive cover story each time he pops in to the room, creates one of the biggest laughs when he eventually quips that the “cake stand story goes on a bit”. 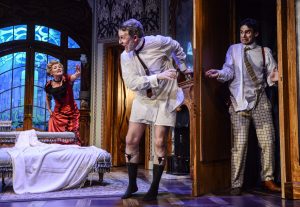 The asides from the actors have the audience involved with the events unfolding on stage which enhanced the intimacy of the setting and there are some hilarious acknowledgments of breaking the fourth wall. A couple of my favourites were firstly by one of the characters who asked another character if they said something and the response was “no it was an aside”.  The second was during a scene change in the first half of the play which the cast undertook themselves in a swift and entertaining fashion. They waltzed as they moved props while Babette the maid played a violin, at one point sitting to listen to her music before a stage manager wearing a headset and blacks, walks on to give them a mock telling off. 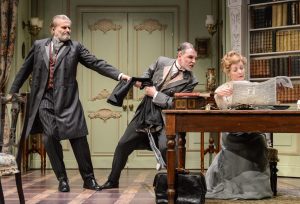 If Fawlty Towers was set in France during the turn of the century, sans hotel this production does get pretty close with references fans of the sitcom will pick up on, I certainly did. The interaction between Cassagne (Peter Bourke) and Leontine was reminiscent of the O’Reily saga in The Builders episode as well as nods to Basil moments such as the champagne bottle between the legs and the clicking of heels. Direction by Nicky Henson, particularly the entrances and exits is swiftly timed and matched with great comic effect to the unravelling of lies. John Cleese has skilfully weaved a complex farcical plot with great precision and the originally French characters easily translate to their English counterparts while still maintaining references to being French, like the maid Babette and the eccentric Poirot-esque Inspector P.I. Bridois (Simon Hepworth) who in the second half plays detective in a whodunit scenario. One of the funniest productions I have seen in a long time, I had tears from laughing so hard.

Bang Bang will be continuing its run at the Mercury Theatre in Colchester from Thursday 2nd March until  Saturday 11th March at 14.30 and 19:30. You can book your tickets from their website https://www.mercurytheatre.co.uk/event/bang-bang/ or through their box office on 01206 573948