Review of: Orbits at The Drayton Arms Theatre

The play is a remarkable and thought-provoking piece of theatre, revolving around two revolutionary as much as controversial figures.

Orbits derives from a play by Bertold Brecht entitled Life of Galileo, which he conceived in 1939 and adapted during his stay in America in the ’40s for Laughton to be the main character. While Life of Galileo is primarily about the Italian scientist and his bending his beliefs in scientific truth to the demands of a bigot society, Orbits factors the role of Laughton in the picture. We are presented with an intriguing triangulation among the three characters, as well as the ideas and values they represent. The parallels that can be drawn are multiple: much like (Brecht felt that) Galileo betrayed his integrity by accepting the accuse of heresy moved by the Catholic Church, in a similar way did (Laughton think that) Brecht betray his communist ideals by not portraying them convincingly in his theatre. 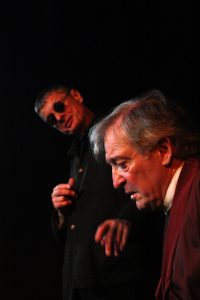 Revolving around the notion of truth, the play offers a strong and interesting kernel. The most powerful parts are those that more closely resemble a trial, for example when Galileo pronounces his passionate (albeit insincere) defence speech, or when Brecht is being cross-examined regarding his communist beliefs. The scenes featuring Brecht and Laughton, on the other hand, ended up being slightly less exciting, and a bit off-point, making the figure of Laughton necessary in principle, but a seemingly superfluous on stage.

Actors Peter Saracen and Edmund Dehn in the roles of Brecht and Laughton/Galileo respectively offer both solid performances. The former, in his caricature of the German playwright, offers a funny take on the character, emerging prominently in the second half. The latter’s affabulatory skills (and American accent) are also convincing, despite a rather raucous voice, at least on the press night. 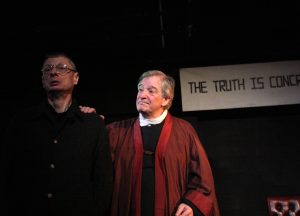 Based as it is upon philosophical and sociological notions, the play doesn’t have (and doesn’t need) a spectacular light design or an extravagant set design. A chair, a table, and a few props are enough to bring on stage a cosmic conflict of big personalities, and to flesh out questions just as big.

In a post-truth world, it is good to be confronted with the question ‘What is truth?’. And, as it befits good theatre, the viewers are left to decide themselves whether “t
he truth is concrete” or, as Galileo has it, “the truth is clay”. All in all, the play is a remarkable and thought-provoking piece of theatre, revolving around two revolutionary as much as controversial figures.

Orbits will be running at The Drayton Arms Theatre until 11th March at 20:00. You can book tickets from their website https://www.list.co.uk/place/63334-the-drayton-arms-theatre or through their box office on 020 7835 2301