This week Iris Theatre, based in the Actors Church in Covent Garden, presented Running Mate. A brand new musical based upon current political affairs; manipulation, ambition and deceit. A politician chooses a social media darling to be his running mate based on her popularity and followers. Although things start well the cracks soon begin to show when she appears to upstage him. 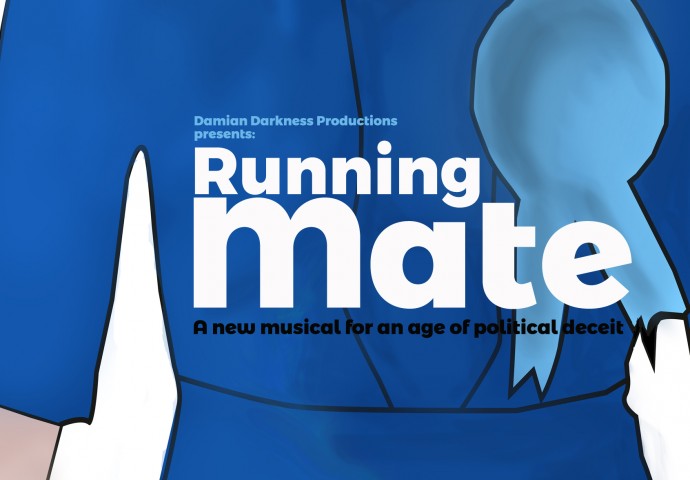 The cast did a fantastic job of breathing life into what was a difficult script especially as they were hampered by technical difficulties during the first act – an errant radio mic and feedback. Praise should go to all involved for keeping a cool head and getting it fixed with the minimum of fuss.

Damian Appleby script is centred around a plotting politician Paul Powers, and his aide Alan Altoplane as they aim to win an American ‘primaries’ style leadership election with the aid of a ‘running mate’ in the form of social media darling Helen Holiday.

In theory then this sounds like a very timely piece, however it somehow failed to land any of it’s punches. Perhaps Amando Ianucci is right. In the age of the first Twitter president satire truly is dead, after all, when our political leaders seem to be doing such a good job of being their own parody what is left for the satirist to do?

However after a year that’s seen the rise of fake news, post factual politics, right wing popularism, the rise and rise of social media as a powerful political weapon orchestrated by shady big-data marketing companies like Cambridge Analytica, it feels like there is an awful lot that needs to be talked about. Sadly though, Running Mate failed to really talk about any of it.

Indeed compared to the events of the last year the picture of politics painted by Running Mate was almost optimistic – hapless power hungry politico who doesn’t understand social media, a scheming assistants and a tech savvy but politically naive ingénue. Compare them to anyone currently at the fore of world politics and they’d be a refreshing alternative.

Which leads us onto a second problem. I just didn’t believe in any of the characters. The cast did a great job with what they had, but I just didn’t buy it. I was never sure if the script wanted fully rounded individuals or comedic caricatures. The naming of the characters, Paul Powers, Helen Holiday, Alan Altoplane, nodded to caricature, as did a large proportion of the scenes and yet both of the main protagonists were given a soul searching monologue completely at odd with this at the end of the show. It was hard therefore for the cast to know quite where to pitch their performances. Jonny Parlett sided with a thoroughly enjoyable, full blooded melodramatic reading of Paul Powers, while Sarah Deeas tried a slightly more sensitive and naturalistic approach with Helen Holiday.

The music in the show, ably composed by Guy Wah, was enjoyable and the singing a genuine high point of the production, with both Sarah Deeas and Jonny Parlett doing fantastic numbers ranging from blues to ballad to gospel. However the thoroughly American tone to the score did highlight another issue with the production. Within a British context the scenario felt completely devoid of reality.

The UK doesn’t have primary style elections, presidential elections, or running mates. And while this was nodded to in the show, when Paul Powers comments it’s usual to have a running mate in Britian but he’s going to anyway, this is a wholly inadequate explanation as there’s nothing for the running mate to run for. In the US the running mate of a presidential candidate is running for the vice presidency. They are both running for office. If Appleby is more interested about critiquing an American style electoral process why not just set the show in America?

As an early work in progress Running Mate had many elements that showed promise. Maybe in a more innocent age we could have overlooked it’s simplified politics an nativity, however as the first week of the Trump presidency unfolded the satire of Running Mate felt very thin indeed. As the next stage of the production I think Appleby should go back and really try to hone what he’s trying to say: who are the specific targets of his satire, what are the actual situations they find themselves in, how do they play out? With real life being so very much stranger than fiction, the bar has been set high for writers, but praise should be given to Abbleby for attempting to meet that challenge, we need good political theatre now more than ever.

The musical is directed by Guy Wah with music played by Mishkin Fitzgerald with guitar accompaniment by Charlie Sherbourne.