Review of: Baddies the Musical

Fairytale villains have their say in a kid-friendly rock musical; familiar to anyone who's seen Shrek but groundbreaking to those just growing out of fairy tales

The best measure of a children’s show naturally comes best from the children watching. The greatest praise ‘Baddies: The Musical’ could receive came from the early teens who whooped and hollered for the ‘bad guys’ who were our heroes, and shrieked sassy comments at the ‘villains’ (heroes in any other story), and from the six-year-old boy sat behind me. When the lights went down and Marc Teitler’s intriguingly modern, techno-evocative score began, the boy panicked and demanded to leave straightaway. However, a glimpse of Red Riding Hood’s cape moving through the auditorium enraptured him so much I heard nothing else for the rest of the show – until he started kicking the seats demanding Act Two start straightaway.

Both responses demonstrate how well ‘Baddies: The Musical’ captured its target audience. The story suggests that characters ‘play a role’ in their fairy tales, but their real personas might be very different – Rumplestiltskin, for example, is a put-upon Scot with a talent for maths (this information becomes crucial to the plot – has an auditorium full of children ever cheered for algebra before?). Do bad guys still have a role in stories? What’s left if you take out the villainy and conflict?

The piece plays more as a concept musical than straightforward narrative piece, with songs often serving to underscore a character’s argument than propel the narrative – the Wolf’s outbreak of genuinely villainous rage leads into a slow jazz ballad. The script often veers into blatant literary criticism (the Ugly Stepsisters rehash, and then sing about, the double standards that judge female characters on looks alone), but then sometimes bursts out in cross-demographic wit. The most memorable lines often come from the original stories themselves, though received in a very modern light – Peter Pan declares at one point that “boys are cleverer than girls” and the audience rose to their feet in rage. 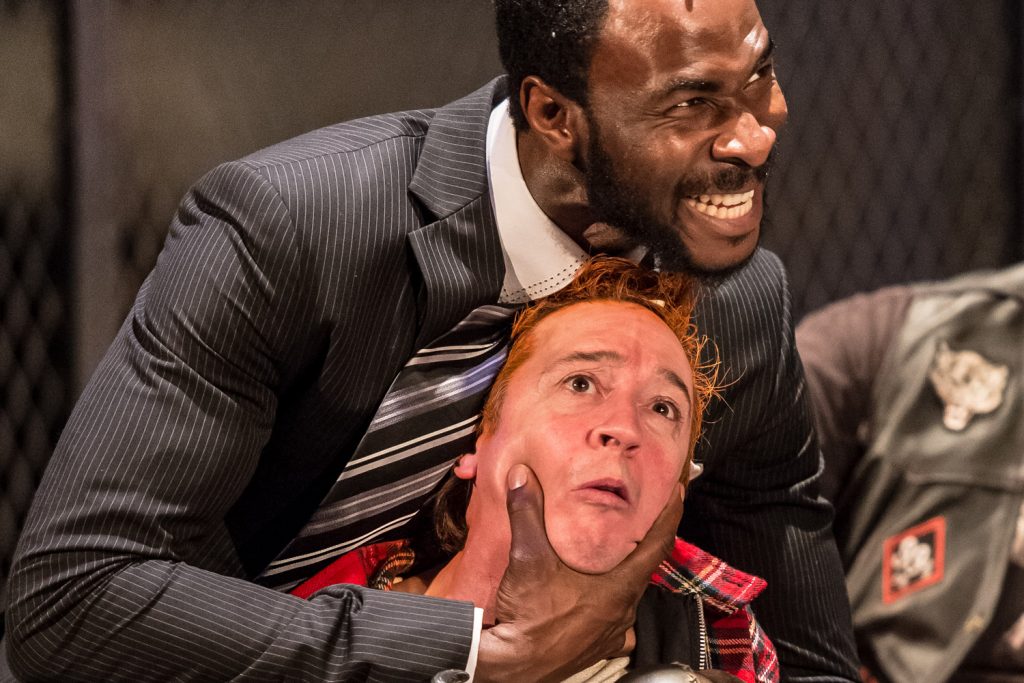 The design is a subtler look at the dialogue between the old and new tales. The curtain is a painted backdrop as you’d expect in a village pantomime, but it rises to produce a cavernous stage with the boxy shapes of a prison (where most of the action takes place). The lighting design is gently thrilling, with colourful searchlights both highlighting the prison atmosphere and gently evoking a rock concert.

The performances carry the piece, particularly in the material’s didactic moments. The Ugly Stepsisters are straight from the London youth scene, but Karis Jack and Ngo Ngofa (the latter also choreographed) give gorgeous voice and engaging sass to the characters – they are also the best by far at Ngofa’s slicky jazzy routines. Christian Roe’s Peter Pan is the audience’s love-to-hate figure, a California surfer dude who dispatches ridiculous dialogue with a poker-straight face. These character turns serve to support Nigel Barrett’s central performance as the Big Bad Wolf (cunningly evoked by facial hair and a ‘Lone Wolf’ shirt, clear enough to define the character but not enough to scare the smaller audience). Barrett nimbly moves from audience representative in the fairy-tale world, interrupting his fellow bad guys with real-world morals, to a genuinely terrifying figure in his truly villainous moments. It’s a tricky task to move from ‘good’ to ‘bad’ and never lose your audience’s loyalty, and Barrett pulls it off brilliantly.

The point may be made a little bluntly, but the claim “you need bad guys in a good story” is hard to dispute. If you’re old enough to remember ‘Shrek’’s 2001 debut, ‘Baddies: The Musical’ is familiar content. However, if you or your charges are just growing out of the old-fashioned fairy tales, this one’s a hit.