Review of: Lunch and the Bow of Ulysses at the Trafalgar Studios

If you’re looking for a self-contained 90 minute experience with wonderful writing, look no further - it can be found in the cosy quarters of Trafalgar 2.

As the audience began to nestle themselves into Trafalgar Studios 2, I overheard one voyeur remark to another: ‘Sean Dooley has a great voice – he does all the advert voiceovers that you think David Morrissey is doing.’ Indeed, as the show continued, this became incredibly obvious – Dooley has the vocal equivalent of well-polished oak, warm, almost worn with age as if part of some well-used yet incredibly ornate furniture. Waxing lyrically about Dooley may seem relatively verbose out of the show’s context, but given this was a double bill of Berkoff, it seems almost entirely in keeping.

Man, woman, seaside bench, discussions of sex – that’s certainly the briefest way to surmise Lunch and The Bow of Ulysses, two short Berkoff plays directed by Nigel Harman. These aren’t two plays inasmuch as two visitations on a pre-existent couple, at first in the clutches of sexual attraction, later toying with the idea of resenting their decades of romantic unity. These are sumptuous topics, ripe for plucking, disentangled by the writer with a relative ease.

Berkoff is unparalleled – this is a given. But the show has to live up to its writers incisive language and form. For the two actors, there is certainly little to fault – Dooley, as previously mentioned, is capable of rattling off entire monologues with casual ease, never loosing focus, or tension, in a taught, leather-worn character of Man. What was most surprising was Dooley’s physicality – bordering on soft clowning during the early elements of the show. 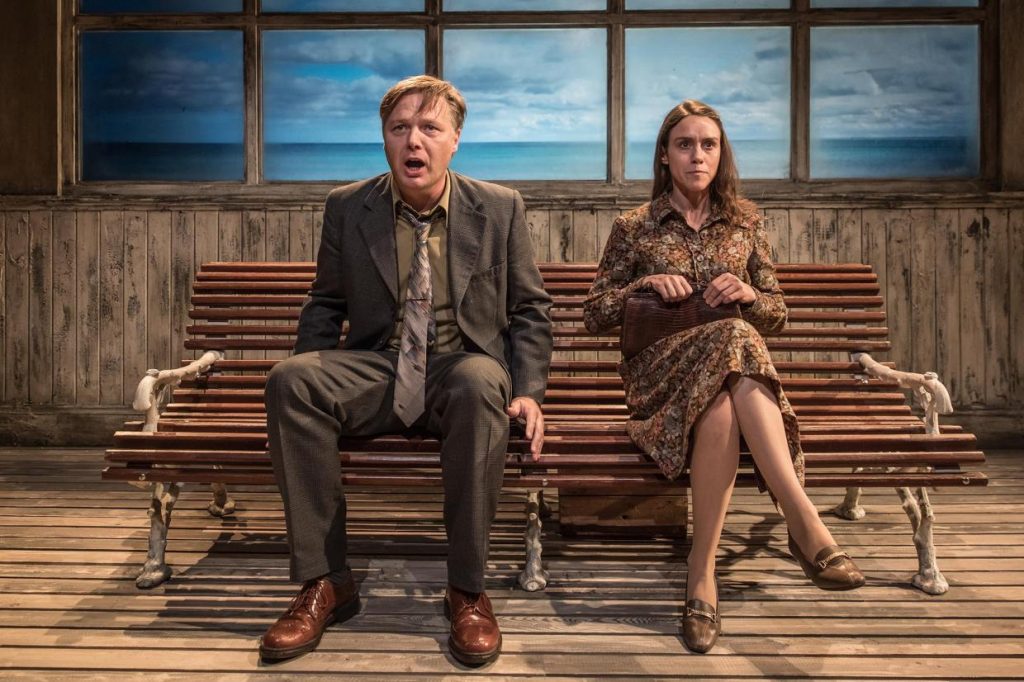 For all this however, it was the scathing drawl of Emily Bruni as Woman that achieved  even more with so little – her etched facial expressions unmovingly powerful throughout. This was exciting to watch, moderation being used for such effect.

Certainly Nigel Harman struggled to overcome some of the static elements of the show – particularly in the first half when a vibrancy in movement was necessary. In the second act, this lack of movement was entirely apt – perhaps a greater contrast could have worked better. The design Lee Newby was well constructed – a satisfyingly simple assortment typical of a London pier – the ebony linings on the typical pier beech being a wonderful little touch.

Berkoff has long been prey to the clumsy A-Level adaptation – therefore to see him in such splendour makes for a rare little treat. If you’re looking for a self-contained 90 minute experience with wonderful writing, look no further – it can be found in the cosy quarters of Trafalgar 2.