A punchy and powerful family memory drama, with a non-linear structure which explores how a family remembers, distorts and makes a narrative of its trauma.

A young woman named Angel sets out a circle of plastic chairs, fussy until satisfied with the precision and equality of the circle. These are filled by the extended members of the Brook clan – a dysfunctional family spanning generations and racial heritage. She has brought them together to address a past wrong – but in the attempt to do so, this confessional space becomes a liminal arena of conflicting memories and perspectives. Scenes begin in one time period, and end in another. What emerges is a picture of collective memory – of how a family remembers, distorts and makes a narrative of its trauma. 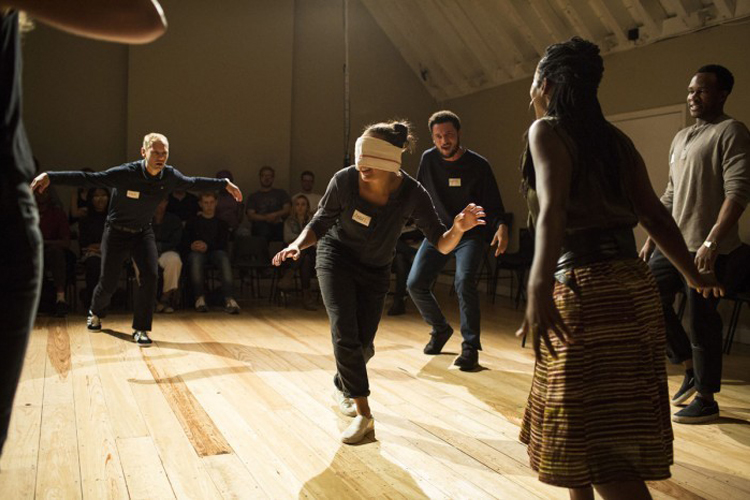 The cast making up this family drama are beyond the cliches usually inhabiting the genre, and all are vivid portraits of inmates of a family dynamic. At the heart of this matriarchal family order are four sisters, including one set of twins, from different fathers with diverse racial backgrounds. And whilst the narrative circles around addressing an accusation of abuse made by one of their grown children, the prejudices and history of abuse that defined the sisters’ upbringing runs deep within the family’s collective identity. And it is this collective identity that is at stake – threatened both by the implications of abuse and by wider social fissures regarding racial identity.

For almost the entirety of this extraordinary play, no matter who is directly involved or implicated in the events described, the whole family remains on stage. This canny piece of direction builds a claustrophobic texture of glances, goading and bearing witness which creates layers of alternative meanings alongside an artful and enigmatic text – a text which itself balances simultaneous narratives and conversations which compete to define the truth of a tragedy.

In an extremely talented and uniformly excellent cast, Adelle Leonce rightfully deserves attention for her central performance as Angel. Yet the cast as a whole achieves a down-to-earth naturalism and an easy chemistry which enables an interrogation of the relationships within a family. Kirsty Bushell gives a sensitively dry-humoured and damaged performance as “Aunty J”, whose comic impressions of their alcoholic matriarch of a mother mask a buried personal pain. Indra Ové excels as “1st Twin”, Angel’s estranged mother, whose fragile resistance to her own culpability in a conspiracy of silence manifests itself in a brittle performance of gentility. However, the standout performance for this reviewer came from James Hillier as Angel’s white stepfather, and the accused. Hillier provides a subtle countertext to the script’s wrestling with his suspect innocence. A lecture he gives Angel on the slave trade, and specifically multiracial house slaves – given a whole extra context when observed by his multiracial wife, Angel’s mother – is a masterful portrayal of simmering manipulation.

This is punchy, powerful theatre which engages with form in a complex and meaningful way.