Review of: Our Ladies of Perpetual Succour at the National Theatre

Produced by:
National Theatre of Scotland and Live Theatre co-production

A bawdy play-come-gig that displays the best attributes of new British theatre. Lee Hall's adaptation of Alan Warner's novel ranks alongside Billy Elliot and the six multi-talented girls surely have a great future.

Watch out, the convent girls are in town! This is a fast paced and very bawdy coming off age play-come-gig that demonstrates many of the current strengths of British theatre. Having had great success last year in Edinburgh, and following a successful mini-tour, Our Ladies of Perpetual Succour has transferred to the Dorfman theatre at the National and shows every sign of being able to develop its run still further.

An all-Scottish cast of 6 girls plays both the school choir, in Edinburgh for a competition, as well as all of the people they encounter on their drunken cavorting through the city and back at home in Oban. For the girls, the trip to the city is regarded a chance to drink and fornicate to excess, and we are taken through their day via musical interludes of both their choral competition pieces and their own interpretations of some pop standards. There is a strong sense of girls excited but wary of leaving the supportive sisterhood of school days and being in a choir to embark on an independent adult life. 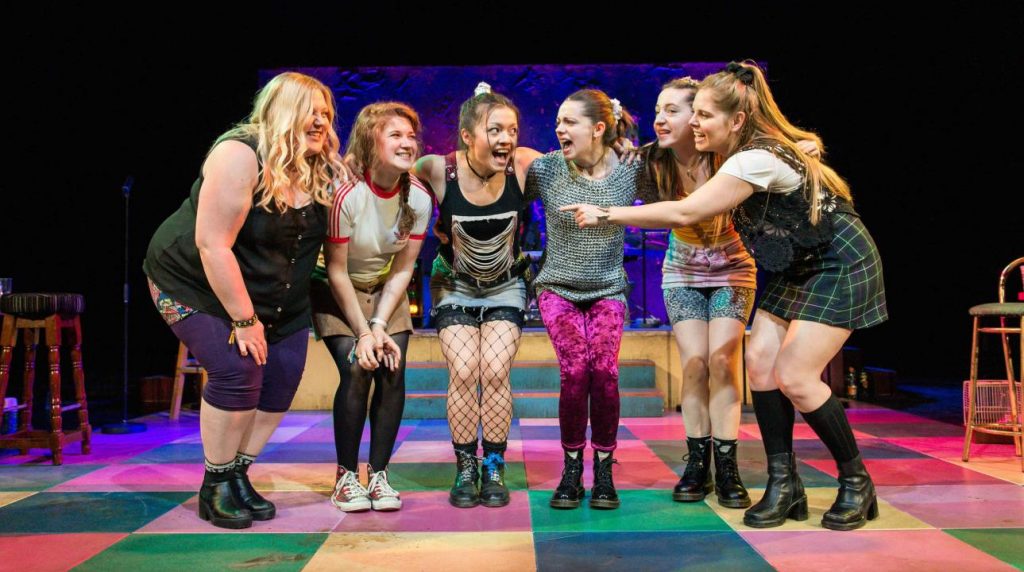 The range of characters allows us to empathise from a number of directions. Fionnula is the most popular girl at school, with the rest of the choir hanging on her every word, but the bravado is holding a degree of sexual confusion. Kay is the one who has got into university and is seen as prim, but is hiding a big secret. Orla has recovered from cancer (or has she?) and is desperate to have the experiences her illness has denied her. The larger than life girl, Chell, who struggles with self-esteem issues, is complimented by Kylah and Manda, who are tackling life with gusto and sexual abandon. The cast is multi-talented, and can all sing and act to a level that will assure them of long careers, with Dawn Sievewright particularly outstanding as Fionnula. Her comic timing in playing a sleezy bar-fly that tries to seduce the girls, but maims himself before he can do so, is a moment of pure genius and worthy of Commedia dell’arte.

Lee Hall’s adaptation of Alan Warner’s novel (The Sopranos) is a worthy follow-up to Billy Elliot and one could readily see a film being made from the stage production, as opposed to the opposite with Billy Elliot. The one note of warning is that, if you found the level of profanity in Billy Elliot uncomfortable, you will have real issues with this play as the expletives come thick and fast. The 3-piece band seamlessly fits into the action, and a spare set with props doubling-up as much as the girls do allows us to imagine the shifts from a dirty nightclub to a house over-looking Oban, while still getting the benefits of cutting-edge theatre. Kylah’s preoccupation with her father’s record collection means that a lot of the non-choral songs are by Jeff Lynne (ELO), and while this may not be to everyone’s taste, in the hands of these girls they have fresh grit and meaning. This exceptional production deserves a move to a bigger venue and who knows – maybe a film version.