ALISON FITZJOHN has been involved in Horrible Histories shows for over ten years, produced by the Birmingham Stage Company, and based on Terry Deary’s celebrated series. To celebrate Barmy Britain‘s five year anniversary in the West End (making it the longest-running children’s show in West End History) BSC staged a specialist production of Horrible Histories – The Best of Barmy Britain! from the 5th August – 3rd September. Theatre Bubble caught up with Alison Fitzjohn to find out what it is like to be involved in such a theatrical phenomena. 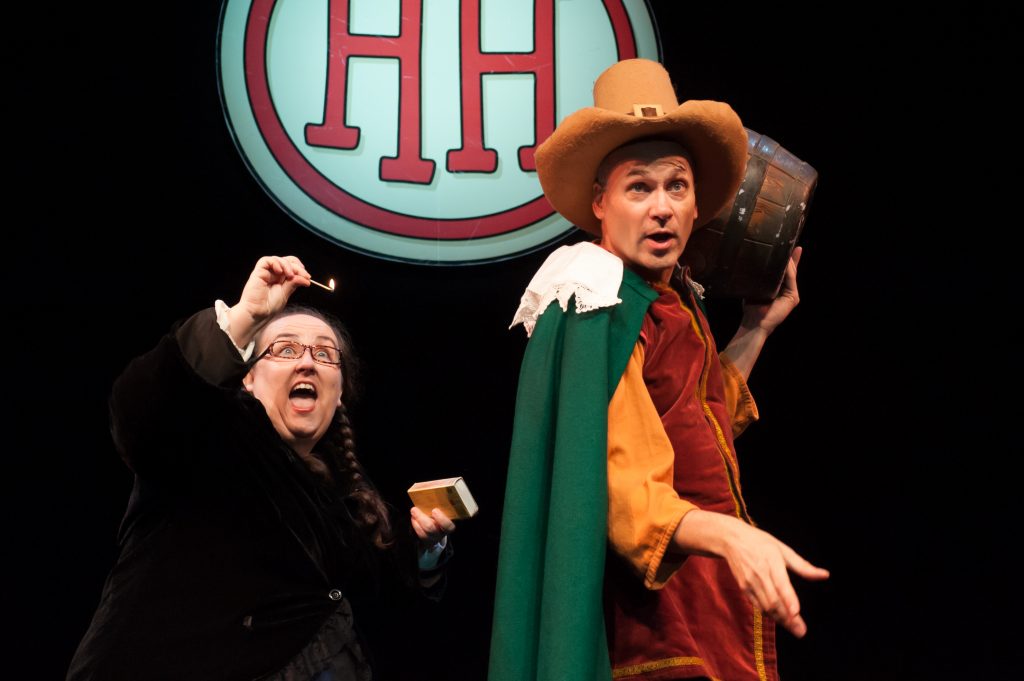 Theatre Bubble: Terry Deary’s Horrible Histories’ series has been the mainstay of making history interesting, funny and relevant to most young kids for a long time. How did you become a part of the stage adaptations?
Alison Fitzjohn: I was at university and was in my final year. I was very lucky to have gained an agent from my college performance of Company and I auditioned for the first ever Horrible Histories shows Terrible Tudors and Vile Victorians. The morning after the audition I received a call from my agent to say there must have been some mistake as they had given me the job! Ha ha…the rest is history – Horrible History!

TB: Do you think we can truly learn from our own Horrible Histories or are we doomed to repeat our mistakes?
AF: It is my job to tell the tales of the past and not really comment on the future!  In our current production, Best of Barmy Britain, we end with a song comparing the crazy past with how we live today so I’ll let the audience decide this one!

TB: What is the most interesting historical fact that you know?
AF: Oooo, which one shall I choose? I think it is about Burke and Hare. They are known to be body snatchers…digging up dead bodies etc but actually the Irish duo (not Scottish like you might believe) owned a guest house in Edinburgh…and murdered their guests! 16 in total and then sold their bodies. It is one of my favourite Horrible Histories scenes.

TB: You’ve recently performed in a production of David Walliam’s Gangsta Granny and have previously been involved in Roald Dahl’s George’s Marvellous Medicine. How did those shows differ from an acting point of view?
AF: This is a really interesting question! Gangsta Granny is such a fantastic show. It is a beautiful, gentle story about the importance of the older generations in a family. The acting is very truthful and the story is what the actors concentrate on. Concentration on the relationships of the characters is really what seems to grab the audience. Although we do see Grandma and Ben try and steal the crown jewels so maybe it isn’t that truthful!

George is just as fantastic for a different reason. The relationship between George and the audience really shines in this one. We count on the audience to remember and shout out what ingredients were put into the medicine. It can get pretty loud in the theatre when 1000’s of kids are shouting ‘brown paint’ at you! It is filled with giant chickens and growing grannies!

Both shows are just great to perform in. Fantastic stories, wonderful characters, great relationships and most importantly the audience leaves the auditorium happy and fulfilled.

TB: What do you think are the most vital and key skills for actors when performing for a primarily younger audience?
AF: Interestingly enough I don’t think the skills needed for a younger audience are any different to an adult audience.

TB: What is life like as a touring actor? Do you establish a routine in such an ever-changing environment or does constantly shifting and moving get in the way of that?
AF: I love being a touring actor. I’ve done it now for about 10 years or so and I love seeing how all the places differ and how the audiences differ in each place. We all find our own ways of doing things and feeling comfortable whilst being away from home. I’m someone who doesn’t really need a routine. I guess in a weird way not having a routine is the routine ha ha if that makes any sense! In any job there are the good things and the bad things and touring with a show is no different. Touring can be lonely, unsettling and tiring but it can be adventurous, exciting and invigorating as well!