Review of: The Raunch

The premise for this show at first sounds promising – a conglomeration of cabaret and circus acts, selling itself as ‘the most fun you’ll have at the Fringe!’. Sadly, despite some truly fantastic acts, the show never quite takes off, as the storyline holding it all together is a quite fragments at points and doesn’t really allow the individual performances to shine. 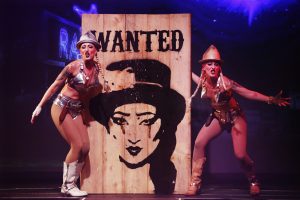 Unsurprisingly for a piece called The Raunch, there is a fair amount of burlesque and skimpy outfits on show  – however, these are put to much more imaginative use than in a normal cabaret show. My personal favourite was a nipple-tassle-off between Empress Stah and Miss Fancy Chance, which managed to combine both cabaret and circus instead of setting them awkwardly alongside each other, as was the case for most of the piece. Various sections such as My Bad Sister’s knife throwing underwhelmed, but their ‘Daddy’s Got A Gun’ at the start was fantastic – their obvious strength being cabaret/burlesque, but due to the nature of the show being pigeonholed into a circus routine that held up rather than continued the story.

The much more circus parts of the act were impressive, such as Empress Stah’s light show, Jair Ramirez’s acrobatics and Miss Fancy Chance’s sets – but these were few and far between. Circus shows should be of the sort where you sit and gasp at every single performer that comes onstage, and leave with admiration of the talent of those onstage – sadly, in The Raunch this was not the case for every act. The show needs to decided what it wants to be and cater accordingly, as the mashup between the two at 6.30pm where most of the audience was sober didn’t quite click.