Review of: Daffodils (A Play with Songs)

The bittersweet of a Kiwi couple told with songs and stories

From the off, Bullet Heart Club’s Daffodils (A Play with Songs) invites us to entertain the notion that the show is possibly true at every turn. We are made aware that the show is based on true events, and the main action of the play is bookended by monologues made by the “daughter” of Rose (Colleen Davis) and Eric (Todd Emerson), telling us that the story is mostly true.

The result is that these characters, endearing and sparky enough as they are on their own, carry a special kind of emotional currency with the audience. We know that they end up together at some point – the script is by their daughter, Rochelle Bright – and so with this inevitability cleared in the first 30 seconds we spend the rest of the play hoping that they end up happy together. On a set made up of carpets, microphones, projections, and a live band, Davis and Emerson sing and speak their way excellently through the story of Rose and Eric’s relationship.

The projections are simultaneously great and distracting. When the projections show what can only be assumed as footage and photos of the real Rose and Eric, the slideshows are perfectly fitting, tapping into a vintage cosiness and mixing the real and fictional stories. When they show footage filmed by the company – birds-eye views of the couple dancing in a ballroom, or on the beach, or on a motorbike; footage that shows us what is currently being narrated – it becomes an irritant. The company need to trust their audience’s imagination more, and trust in the ability of the script and the actors to tell the story without these unnecessary projections. 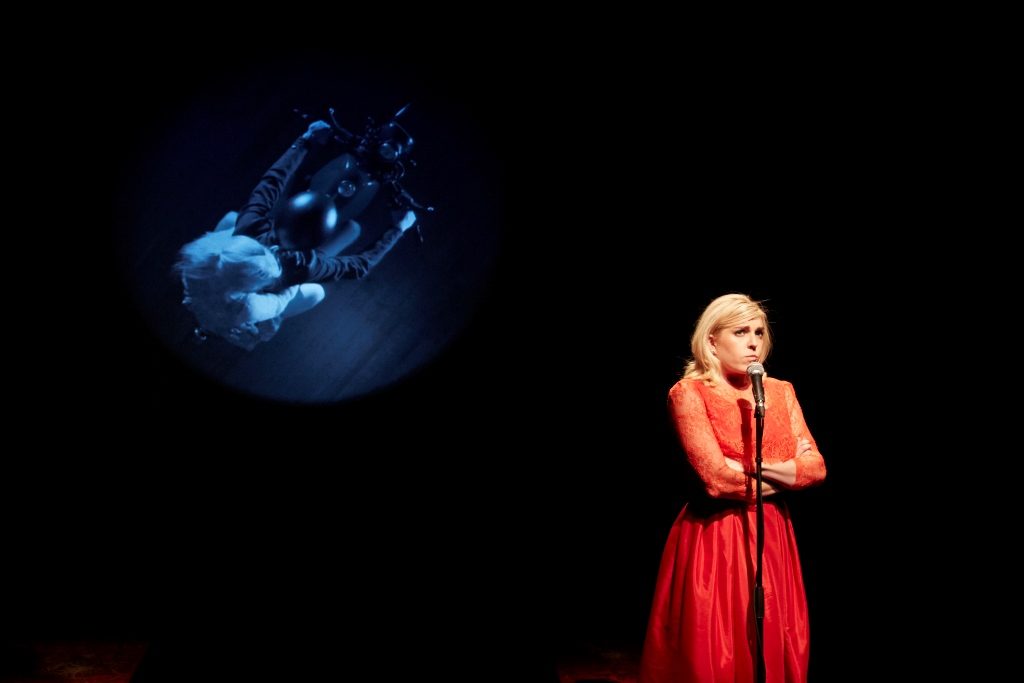 The band is fantastic, and despite the fact that the play’s subtitle is A Play with Songs, the songs don’t feel like they are “with” – they aren’t an afterthought. The songs blend perfectly into the text, speaking for the characters when they can’t express themselves while also setting a perfect aural setting of the time. In a way, perhaps the title undersells itself; the play does not come first and the songs second. Rather, this feels like a story that couldn’t be told without the music.

The play’s end is unsatisfactory, unresolved, and ultimately heartbreaking because of this. For all the joy Daffodils is to watch –and it is utterly charming – the fun of the earlier parts of the play additionally serve to make the difficult ending even more saddening. It is unclear how much of the play is actually real, how much Bright has fabricated, and how much is just conjecture. But the play’s frayed ends are not neatly tied, which, regardless of how much of Daffodils is fact or fabrication, certainly feels real – and, as a result, Daffodils packs one huge final punch.