Review of: Titus Andronicus at the Rose Playhouse

This physical theatre based production ran aground through poor pacing, nonsensical scene cutting, and boring self-involvement 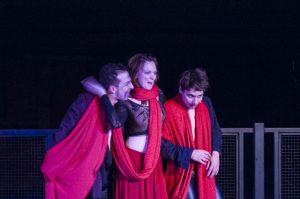 Shakespeare’s first tragedy may often be dismissed as a ridiculous bloodbath, but a strong, clever production can often bring out genuine pathos and/or wickedly irreverent humour. Therefore, after seeing a few such quality productions, I always jump at the chance to see the infrequently-performed work. Unfortunately, despite the excitement around seeing Titus Andronicus at the Rose Playhouse – the site of its original 16th century performance – this performance, presented by Contemporary Shakespeare, is a nonsensical, self-involved bore lacking any sense of character motivation or cohesion.

The Rose Theatre’s website states that New York based South Korean director Jung Han Kim has re-created Shakespeare’s earliest smash hit (while dismissed by modern critics, it was indeed a blockbuster upon its original opening) to emphasis the violence and underlying causes. He is there quoted as saying, ‘I am interested in exploring what Shakespeare truly wanted to tell the audience through this cruel story, and discover its deeper meaning […] We will not only visualize but put breath and movement on the text to share what we felt when facing this play’.

Reading his words after seeing the production makes the whole piece seem all the more misguided. The pacing is erratic – scenes play out ponderously slowly, and then jump ahead acts to the next chapter with no thematic explanation. If one has no prior knowledge of Titus, this production makes no sense; with prior knowledge, it seems like a travesty. Character motivations are lost along with the plot while the most graphic events of the play – even the ones originally (and tactfully) portrayed offstage – are overblown even by the standards of a revenge tragedy. The result is absurd disconnect, with no sense of telling ‘this cruel story’ with any ‘deeper meaning’.

The production’s saving grace is its 90 minute run time; the audience did not have to sit through this ill-achieved piece for long. Additionally, the physical theatre ensemble, while utilised in abysmally senseless ways, would have been incredibly effective and dynamic had the production fully committed to its meaning and pacing. As it stands, the mix of disjointed text and incohesive physical theatre (not to mention odd pauses and audible breathing) made it seem like a first-draft drama school experiment.

Titus Andronicus plays at the Rose Playhouse, Southwark, until 30th July. Performances are at 7.30pm Tuesday through Saturday and 3pm on Sunday. Tickets are £10-12 and can be booked at http://www.roseplayhouse.org.uk/events/event/titus-andronicus-william-shakespeare-2016-07-05/