Review of: Some Girl(s)

An excellent, well-crafted new production of a LaBute classic 'battle of the sexes' piece, with wit and biting observation backed up by stellar performances 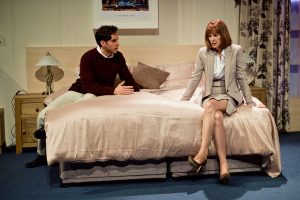 The American playwright Neil LaBute seems to have made his career writing about the clueless, self-obsessed man and the hurt he obliviously leaves in his wake. Some Girl(s) – a seminal example of this form – is witty and biting yet feels incredibly real, ordinary, mundane even. Its brilliance lies in the simple, vignette-like conceit: a man travels around the United States, making sure four of his most meaningful ex-girlfriends do not harbour grudges against him before he marries his latest flame. This structure allows each scenario to mirror the one(s) that came before – namely, the man’s complete ignorance that what he is doing is completely unwanted by the respective women, and their lack of restraint in telling him so. At the end, the vignettes are revealed as part of a bigger picture – a picture that does not paint the man’s quest for closure any less ridiculous and self-centred.

Some Girl(s) is not a new work; it premiered at the Gielgud Theatre in 2005 and was adapted into a film of the same name in 2013. Buckland Theatre Company’s production, playing at the Park Theatre, features a uniformly excellent cast, well-crafted staging, and well-paced direction – no line is thrown away and no moment left to linger. It is a strong, smart, infinitely relevant revisiting, one which brings peals of laughter at the black relationship comedy. Despite losing a bit of steam and focus in the last scene (after that woman’s initial introduction and before a climatic reveal), the two-hour run time feels very appropriate. Furthermore, this production does not try to soften the man’s obnoxious self-absorbed ramblings – while he may drive the plot, the women’s reactions and reminiscences drive home the central idea: relationships are messy, and making amends for the hurts is useless without awareness of what those hurts were. 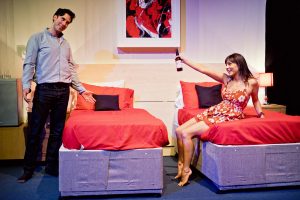 The cast brought vibrancy, humour, and complete believability to their distinct characters. Charles Dorfman, as the unnamed man, is awkward, petulant, and well-intentioned but selfish. As Sam, the high school sweetheart, Elly Condron brings a kindness buried under the resentment and unanswered questions of their past. Roxanne Pallett is buoyant, sassy, and recklessly vivacious as Tyler, the Chicago fling. Carolyn Backhouse plays Lindsay, the Boston professor who the man coaxed into an affair, with nonpareil poise and ruthlessness. Lastly Carley Stenson, as the LA college girlfriend Bobbi, holds a righteous anger which will not be tempered by any pleadings to the contrary. All casting is spot on.

A major distraction in an otherwise strong group of performances is the American accents; only Carolyn Backhouse is convincing, while the others vary between misplaced regional stereotypes and careful speaking to the point of awkwardness. While the play is incredibly specific with its settings, I would have rather seen it performed in the actor’s original accents or at least RP. Theatre is about suspension of disbelief; while no bohemian Chicago artist will naturally have a London accent, it would be less distracting from the words and actions than an exaggerated Brooklyn one.

Some Girl(s) is playing at the Park Theatre (Clifton Terrace, Finsbury Park, London N4 3JP) until 6th August 2016. Tickets are £18 (£16.50 concessions) and can be booked at https://www.parktheatre.co.uk/whats-on/some-girls. Evening performances (Tuesday-Saturday) begin at 7.45pm and matinees (Thursday and Saturday) begin at 3.15pm.