Review of: Depart at the Tower Hamlets Cemetery Graveyard

Produced by:
Circa, LIFT FESTIVAL 2016

Depart is the product of a vibrant and energetic theatrical culture that constantly strives to push boundaries - may it set a bold example for others to follow.

Depart, another bold instalment in the LIFT festival, is a monument to artistic endeavour. Through the tireless efforts of Circa and the LIFT organisers, the Tower Hamlets Cemetery Park has been transformed into a huge, haunting venue, littered with lights, performers and screens, hidden amongst the scores of tombstones and weed-ridden foliage. You’ll be sorely pressed to find a location like it in London – this is a one-of-a-kind.

Circa have taken the cemetery and run with it, guiding audiences through the dozens of different installations, each one lit by ethereal lights, performers, ghostlike, swing from tree branches or emerging from behind masonry. You almost feel as though you’re walking in the footsteps of Circa head Yaron Lifschitz, mentally recognising where each performer could go and which tree would make for an ideal instrument in circus entertainment. There were moments where you’d see pole dancers   posed together in a lonely copse, delivering wonderful routines before scattering back off into the darkness. Other times it was a troupe of pale, female dancers in synchronised isolation amongst the tombstones, ghastly and ethereal for minutes until stillness reclaims them and the audience are ushered on forwards. 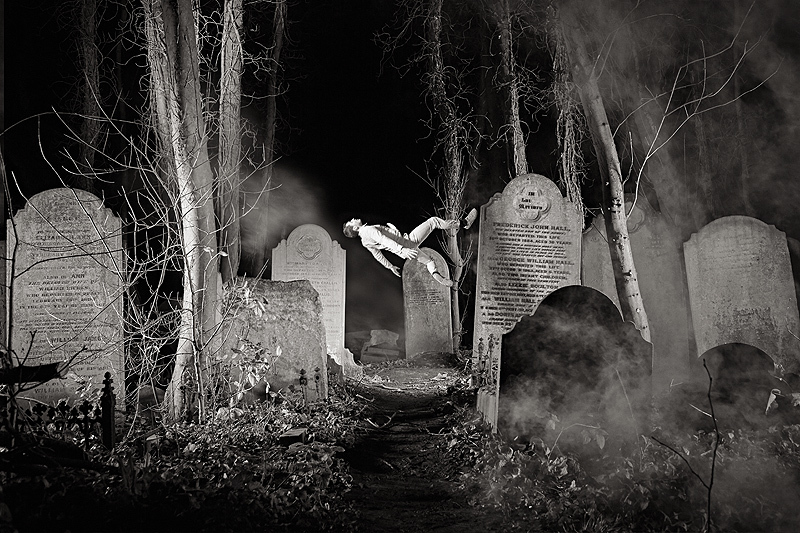 It is worth admitting that not everything about the show came off with such exhilarating promise – the nature of a promenade production attended by around 200 plus individuals, even when split into groups, inevitably led to long delays and some waiting between events as audiences are coaxed to the next location – it felt erringly similar to the same wait you get at a tube barrier during rush hour. Given the logistical exercise the show was, it has too be said that for the most part this was incredibly well executed, but perhaps slashing audiences sizes in half could have been a step towards speeding up the process of movement between acts.

This was a performance piece called Depart, set in a graveyard – it could only succeed if it achieved a complete sense of immersion in the premise and environment in which it was placed. This took some time – only when night fell, daylight evaporated and the moon emerged did the show truly reach its true potential, delivering an exhaustingly memorable finale that saw all the performers come together and forge an incredibly physical, raw sequence of visual feats before the re-assembled crowd.

It is exciting to be living in a city where such artistic experiments can be executed, transforming public spaces into incredibly absorbing work. Depart, along with plays like Karagula or even Handle with Care are the product of a vibrant and energetic theatrical culture that constantly strives to push boundaries – may it set a bold example for others to follow.

Depart is part of the 2016 LIFT Festival. Find out more here.