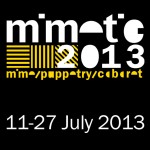 This year Finger in the Pie launched a new competition as part of our Mimetic festival to help fund two new pieces of theatre. Here’s some of the thinking behind it.

We believe in the importance of supporting new work

We believe in the importance of supporting new work. We’re well aware of how hard it is to get new projects off the ground. There’s so often a vicious circle – that in order to get support you need to demonstrate you already have it. We see the Mimetic Commission as a way of giving companies the initial foundation of support they need to attract the multitude of funders, associates and organisations necessary to create a fully staged production. In return for this initial support we ask successful companies to re-invest 2% of the total revenue their show creates, to keep the fund going, in order to give the same support to other companies which they’ve received themselves. As well as financial support the commission also offers £3,000 worth of support in kind, including rehearsal space and mentoring from Finger in the Pie. We believe the commission should represent a lasting relationship. With this in mind we are constantly looking at ways for prior recipients to be involved in how the award evolves – including shaping what we offer through the commission, and taking part in the selection process for the following years.

We hope the Mimetic Commission offers a new approach to supporting theatre. Sitting between top-down subsidy: which has traditionally been in the form of a one sided handout, which gives recipients neither a relationship with the funder which can help decide how the fund should develop, nor asking them to make a contribution back to keep the fund running if they’ve benefited from it. On the other hand it’s not a commercial investment driven by the desire to create profit. If it were still 1996 we’d probably call it a third way, but in todays economic climate we call it common sense.
Author: Alexander ParsonageAlexander is an award winning theatre director and documentary maker based in London, England. He writes on arts policy, funding and theatre development.
Twitter Facebook

Following its successful launch in 2021, The Living Record Festival returns with a programme of original pieces of digital art. [Read More]

Ahead of their run at Trowbridge Town Hall, Florence Espeut-Nickless and Gavin Osborn speak to Theatre Bubble about bringing local stories [Read More]

ENG-ER-LAND by Hannah Kumari. ENG-ER-LAND, directed by Rikki Beadle-Blair and supported by The Football Supporter’s Association (The FSA), will tour [Read More]