It’s perhaps a hard sell for children: a show about women getting the vote. But Horse + Bamboo’s Suffrajitsu at the Little Angel Theatre in Islington (recommended for 7-11-year-olds) has the audience gripped from the first few moments. The two actors: Gemma Khawaja and Alice Rowbottom arrive through the audience dressed in jujitsu suits asking for signatures for their petition to save the “dojo” – the hall where they practice their martial arts. This enables them to segue neatly into the story of the suffragettes and their training in jujitsu, which helped them in their battle for the vote. 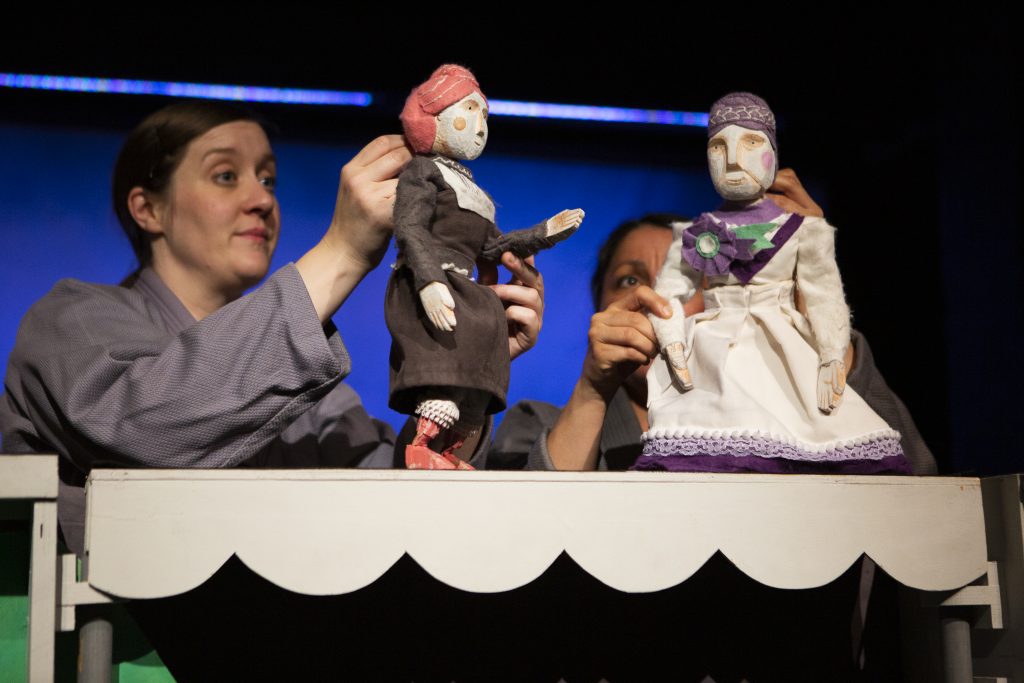 With a delightfully versatile set, the story is told using a variety of puppets as we follow Annie, a worker at a Lancashire mill, as she gains understanding of the importance of female suffrage and joins in the antics in London. The characters are largely fictional, but based on real women, which are all explained in the free programme. One of the stand-out aspects of the show is the fully integrated BSL sign language, which is either incorporated by the actors or played out on a separate video screen when the actors hands are busy with puppets.

The details are exquisite. Handmade patchwork posters with slogans “Votes for Women” and “Dare to be Free”, remind us of the textile trade that employed so many women at the time. Green painted boards create the Lancashire hills, while painted panels depict the women’s fair in Hyde park and the numerous arrests that followed. We get shadow puppets depicting the hunger strike in Holloway prison.

The two 7-year-old girls I took with me were enthralled, even if they didn’t follow all of the story, and I am sure it will be a production that stays with them and they will remember it when they hear the word “suffragette” in the future (or perhaps, even, Suffrajitsu!).