Review of: The Simon and Garfunkel Story

This tribute band does justice when celebrating the story of Simon and Garfunkel.

One memorable hit after another is delivered by Sam O’Hanlon with great expertise and flair as he portrays Paul Simon, the long-term school friend of Art Garfunkel, played by Charlie Blyth. Musically, they are on top form for this performance at the Vaudeville Theatre on the Strand as they unfold the story of Simon and Garfunkel. Blyth cleverly characterizes Art with hand gestures, clicks or gestures but it his voice that impresses as he deftly blends with O’Hanlon vocally and captures something of this incredible duo. O’Hanlon shines with his terrific guitar work and of course a likeable personality when recounting the journey of the two amazing talents whose music chronicles many key and iconic moments in USA history. 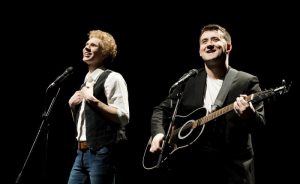 Such moments are captured on a large video screen as it recalls the racial and political changing face of America with a montage of images and snappy Mad Men designs that help place the songs in time.

The narration from the O’Hanlon and Blyth is pedestrian at times and it seems a pity that more was not done to pull out the drama of the duo’s relationship, with scenes of youth, disappointment or success acted out more fully. What we don’t learn from the performers the slides fill in with dates and times – useful information but it does make it all rather functional rather than building an emotional – other than when they sing of course and then you do get a sense of performance and even character, particularly with Art. However, as applause seems to happen after every number and various band members are picked out and introduced the show presents itself as a concert rather than a theatrical experience. This is entirely valid – but a musical it ain’t! For me, that is a shame as there is a drama to unfold here and a straightforward narration simply tells us about the theses great talents rather than involve us in their lives which means we appreciate the songs from an emotional distance.

The upside of all this is – this concert is great show – with its close harmonies, pulling us down memory lane, its percussion, both rhythmic and compelling and its sympathetic lead guitar. Along with cool bass guitar work and lively keyboards this band had swing, especially when a brass section joined them.

This show-stopping tribute band is tight and lively, as it captures the authentic sound of Simon and Garfunkel. It’s a show for everyone, long-term fans and newcomers alike. These guys are great and the songs even greater and the show is breezing through the West End, so catch it if you can.