Rooted in the past with a subtle modern musical edge, Brass is a balanced, touching account of the Great War

In 2014 a new musical was commissioned by The National Youth Music Theatre to commemorate the centenary of the start of World War I. In turn, and rather aptly, The Union Theatre’s production of Brass by Benjamin Till takes place over the centenary of Armistice.

Set through The Great War, the story diverges early on to concurrently follow the lives of the male brass players enlisted as part of the Leeds Pals, and the women of the Barnbow Lasses working the munitions factory back on home soil. Attention being split evenly between the two groups, the musical feels satisfyingly balanced, and gives a contextual nuance that is often either hyperbolised or missed completely in representations of the stories of war. 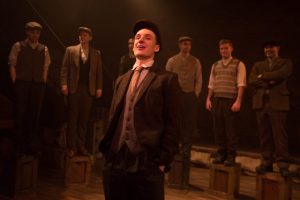 The production is a beautifully composed piece led by a vocally strong ensemble. Not one actor puts a toe out of place on either side of the perfectly drawn line of harmony throughout the score. Some of the lyrical work comes off a little clunky and corny at times, and when paired with what feels like a few too many missed opportunities to reprise themes or relate plot points, a lack of finesse does distract slightly from what is otherwise a beautiful and well-rehearsed show. Fortunately, effective direction, lighting, musicianship, and a talented cast do still make for an elegant and moving production.

Stand-out moments come in the form of the main theme ‘Brass’, performed with aching sobriety by Alf (Sam Kipling), and a solemn and superbly sung duet between Tats and brother Morrie (Lucy Aiston and Lawrence Smith). Being a distant observer over these normal lives torn apart by the long shadow of war is heart-wrenching, but the strong themes of hope and mateship assure that we are able to leave the theatre proud of the stories of these young soldiers and women, and thankful that such stories can live firmly on in our collective memory.

“The memories of those heartbreaking days will last forever. The name Serre and the date July 1st is engraved deep in our hearts, along with the faces of our ‘pals’, a grand crowd of chaps. We were two years in the making and ten minutes in the destroying.” – A.V. Pearson, Leeds Pals

Brass is at the Union Theatre until Saturday 24th November, at 19:30 (with Saturday and Sunday matinees at 14:30). Tickets are available here