Some wonderful singers elevate what is an otherwise unimaginative production.

Assassins is rather a tricky musical at best. The lack of any proper overarching plot combined with a libretto rather reliant on American historical knowledge means that keeping this very British audience enthralled for all of its two-hour running time is no small feat. And while this version boasts some wonderful singers and standout acting, the production falters in creating an onstage world that makes the most of the wonderful bizarreness of the raw material.

Assassins is better described as a series of characters studies rather than anything with a narrative arc. The group of people thrown together onstage have only one thing in common – that they, at some point, tried (and some succeeded) to assassinate the President of the USA. The musical consists of snapshots of their lives, limbo-esque scenes set in what seems like a kind of waiting rooms where the personalities strewn across history interact and try to explain to the audience ‘why they did it’. 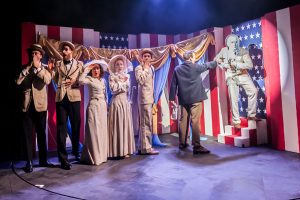 It is incredibly relevant to our times, where America is becomingly increasingly polarized in its relationship to the ‘American dream’ – the killing of a president becomes symbolic, a sign of frayed hopes and a determination to do something. However, this particular production starts to stumble when attempting to create tension within the rather unwieldy structure, especially given their use of the stage space. The rotating set, while clear in its intention, means the stage is effectively divided in half, thereby limiting playing space and forcing most scenes to function in a rather two-dimensional manner, pushed against the front of the stage. Surely the glory of this particular musical is in its overlapping nature, characters from different time periods colliding, spinning off into the distance, watching and judging each other? Limiting itself to this enclosed playing space means the movement becomes slower and lumbering, and the stylistic touches needed to give the piece oomph rather fade into the background.

When the production decides to bring out the weird, abstract nature of the piece, the results are spectacular – each president is portrayed as a type of newspaper cut-out, a mask of a black and white photo, with jolted movements that lend them a puppetry-esque feel. Andrew Pepper is also wonderful as the flamboyant Guiteau, but the standout is undoubtedly Abigail Williams as Sarah Jane Moore – cunning, clumsy, highly intelligent and completely mad, her voice is jaw-dropping and she can send the audience into fits of laughter with nothing but a wrinkle of her nose. Sadly, one can’t help but feel that the lack of thought regarding practicalities in design and stylistic approach undermines what has the potential to be a storming production – this Assassins set to fade into history rather than set a benchmark in terms of production quality.