This adaptation of Tchaikovsky’s classic Eugene Onegin by the award-winning OperaUpClose transplants the action from 19th century Russia to 1960’s Britain – all pastel tones, shag-pile carpets and a stylistic Truman Show-esque feel. With wonderful singers and a fantastic orchestra, Robin Norton-Hale’s libretto and Lucy Bradley’s direction tackle this challenge with a resounding success; only losing tension slightly in the arias but truly ramping it up in bigger ensemble sections. 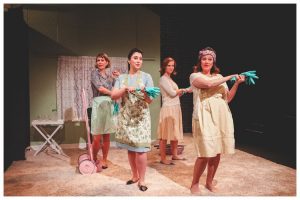 Rosanna Vize’s dollhouse-esque set is all light pink, lime greens, lace curtains and perfectly coiffured hair; showcasing Tatyana’s sheltered life surrounded by the prim domesticity of the almost cartoon-like world. However, the conflict between this prim scene of neat hedgerows and the volatile emotions of its inhabitants only truly comes to fruition right at the very end of the first half. Changing the grandeur of the original ball to a rather patronizing teenager’s birthday party, replete with plastic plates, pork pies and a paper tablecloth, serves to beautifully magnify the pettiness of Onegin and Lensky’s strife. Bradley has a superb skill in creating ensemble scenes; it is here where the politics of the original are seen most clearly, and here where the piece truly comes alive. Anthony Flaum is a fabulous Lensky, lending what can be a rather drab role a wonderful sense of self-righteous jealously and anger – Flaum makes challenging Onegin to a duel, whilst surrounded by fairy cakes and a plastic bowl full of cocktail, seem somehow not out of the ordinary. Felix Kemp’s glossily suave Onegin also has a wonderful voice, but is not quite able to imbue the character with the same three-dimensionality present both in Lensky and Felicity Buckland’s wonderful Olga.

Lucy Hall is a glorious Tatyana, but brings out more of the quiet, soft side of the character rather than a ferociousness that is implicit due to the ‘early feminism’ concept. Any sense of her as an individual (away from Onegin) is only really touched upon at the very end of the piece, where the cutting of Prince Gremin lends Tatyana real agency in her decision not to join her former love. Yes, this does mean the famous aria is cut, but sharpens and clarifies the plot – opera heroines can succeed on their own, not defined by the man they choose to stick by. Tatyana is liberated not through the choice of man she has married, but through her own success.

Alison Howard and James Widden’s version of the score skilfully downsizes the huge Tchaikovsky machine, providing a glorious accompaniment to the fantastic ensemble of singers onstage. Chamber opera is obviously not meant to be the same beast as a full-scale, ROH version, and OperaUpClose manage this transition with style and more than a little flair.