Review of: The Nature of Forgetting

Unforgettable play about dementia is a flawless experience

From the outside, dementia is a frustrating and confusing disease. Those of us with our memories intact are left only to imagine how awful it might be for sufferers themselves, with memories, perhaps the key to one’s self perception, immeasurably fractured. In Theatre Re’s beautiful piece The Nature of Forgetting, the company imaginatively suggest what it life might be like when memory is gone.

The story itself is simple enough – our protagonist, Tom, played by show director Guillaume Pigé, is suffering with early onset dementia, and on the day of his 55th birthday, we travel with him through his whole life, punctuated with significant moments. One might think that with merely four actors and two actor musicians onstage, telling the story of a life would be an impossible feat convincingly, but each actor so totally inhabits every one of their roles that this completely succeeds. Every one of the fragmented memories, told out of order and regularly repeating in slightly different ways, haunts the watching audience as we gradually realise that the life we are going to remember is one that Tom is going to forget. 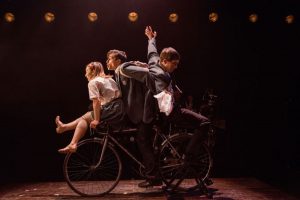 Tom’s life is created onstage through an ingenious and cohesive combination of slick physical sequences and haunting live music, both of which are prepared impeccably. Every moment of the choreography flows seamlessly into the next, even when actors are jumping between multiple parts, a particularly beautiful moment being Tom’s cycle to school with his best friend and future wife fighting over sharing the bike. Louise Wilcox, playing both Isabella (Tom’s lover) and his daughter Sophie, also gives a stunning performance, captivating and alight in every scene.
In many other shows, music and sound of this quality would be the highlight. The two musicians, led by Alex Judd, are stunning, creating a soundtrack that is at some point cinematic, at others delicately intimate. They provide the backdrop to the action, something particularly thrilling to watch – a less brave company may have hidden them from view, but Theatre Re seems to understand that knowing how it is created does not ruin the magic of the show.

It is incredibly telling of the extreme talent Theatre Re has that a show with so few words can be so moving. The Nature of Forgetting is the highlight of the Fringe so far, and I imagine it will maintain this position through till the end of the month.