An excellent production from this young and gifted company.

Silver Lining’s Throwback crosses story telling with music and circus skills. The highly talented cast of young circus performers tell us apparently real stories from their lives and then illustrate them with a circus routine based on the story.

The circus routines were genuinely outstanding. There were skills on display I’ve never seen before, genuinely beautiful and breathtaking. A particular mention should be given to Craig Dagostino who’s pole routine about heartbreak managed that rare mix of emotional depth with physical virtuosity that speaks to the aesthetic sublime. 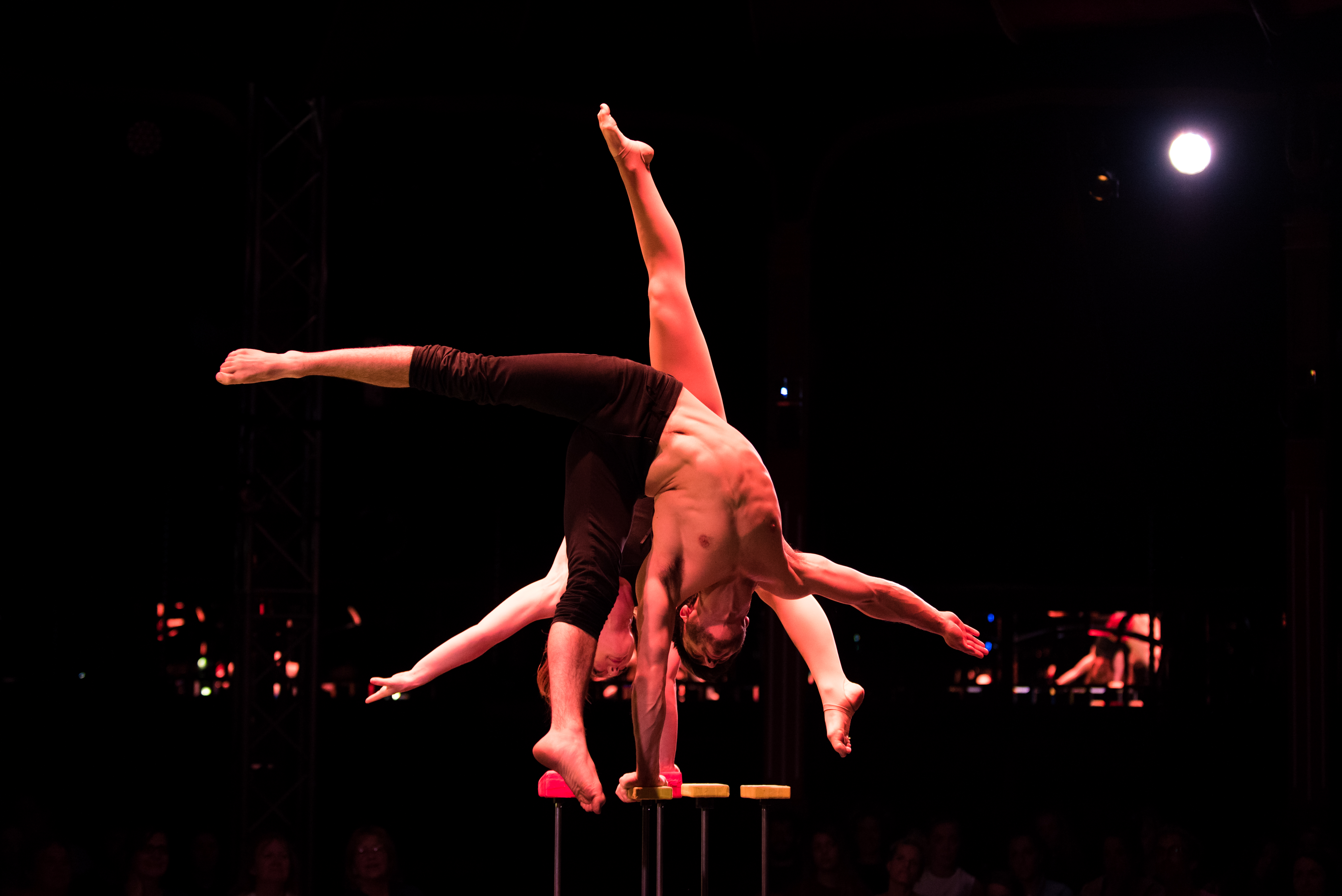 Photographed by David P Scott for Underbelly. All rights reserved.

It is very hard not to fall in love with the cast of Throwback. Their youth, energy and enthusiasm are all very infectious. And, even if not all of their reminiscences and stories landed with the same weight, the quality of their routines and their sheer physical prowess powered the production through.

It seems that the challenge faced by most new circus is finding a conceptual excuse for the turns and tricks. All too often however these framing devises don’t feel like anything more than that: an excuse.

As I’ve already noted the conceit of using emotionally charged reminiscences as a starting point and provocation did create some very powerful routines. However it was the material in between the routines where the show was patchier. I couldn’t help feel that I was occasionally watching moments which should have remained in the devising process rather than ending up on stage.

Watching an actor opening perfume bottles to explain the Proustian Madeleine Cake effect to us, I could almost hear the instruction “for tomorrow’s rehearsal I want you all to bring in an object that has a strong emotional memory”. Which is all well and good when used as a starting point for creating material, but potentially not strong enough to become the material itself.

Paulette Randall and Simon Pollard who directed Throwback have done their best to create a feeling of spontaneity and playfulness. But spontaneity is very hard to mimic. Too often what I imagine had originally been spontaneous in the rehearsal room when repeated in the performance inevitably lost its playfulness. The key to creating spontaneity on stage is a very careful balance between a structured robust framework and genuinely unpredictable spontaneous improvisation within that.

The result of the faux-spontaneity was that the story telling elements of the production all too often fell between the cracks – neither honed and constructed enough to be really engaging storytelling, nor improvised and spontaneous enough to be good clowning. If the company had given the same amount of care rehearsing, finding details and structuring the sections of narrative, as they spent on the circus routines themselves, then this would have been a genuinely flawless production.

I think moving forwards the challenge that Silver Linings should set themselves is to explore that world of genuine spontaneity. With the number of clown courses that have popped up in London over the last couple of years they will find no shortage of places to explore it. Ultimately it’s about being willing to genuinely surprise yourself. It was only at rare moments in last nights performance, a sweaty forehead rubbed on an unsuspecting torso being a stand out exception, that I felt the cast actually took each other by surprise and did something that no one, including themselves, was expecting.

Silver Linings are a very young company, with exceptionally talented and charismatic performers. I have every faith that they can develop into one of the most exciting circus companies in the UK, it’s a journey I will take great pleasure in following.