Review of: A Pacifist's Guide to the War on Cancer

Produced by:
Bryony Kimmings and Brian Lobel, in association with Complicite

A tonally inconsistent piece of theatre, which intentionally splices the musical form with an unlikely subject matter. A slightly wobbly and uncertain first act gives way to a startling show which combines brutal honesty and absurdist fantasy.

If musicals usually cater for a need for escapism, then Bryony Kimmings’ A Pacifist’s Guide to the War on Cancer might be said to offer the reverse. This is a musical, but about a subject from which we already do a great deal of escaping. Instead, Kimmings attempts to address the reality of cancer – of living with it, dying with it, or being on the outside looking in. As she acknowledges in one of several voiceovers speaking directly to the audience, this is a war which will in some way have affected almost every member of the audience and cast. The result is a subversive, sugar-coated mortar shell of a musical which exploits its form more than it conforms to it – although sometimes it struggles stylistically. 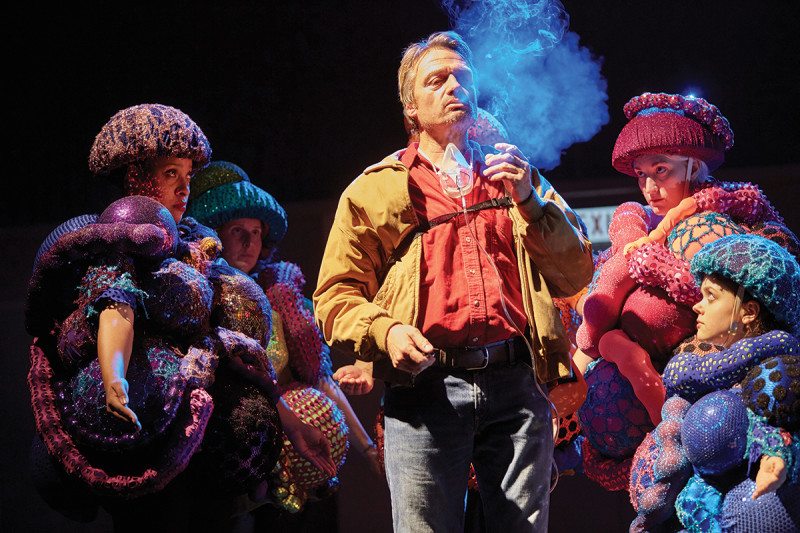 A single mother, Emma, takes her baby for some follow-up tests and finds herself trapped in ‘The Kingdom of the Sick’ – an absurdist nightmare of an NHS where all doors are labelled ‘EXIT’. The cast of characters she meets – amongst them a pregnant eighteen-year old waiting to hear if her child will be born with the same condition, and a positive-thinker who believes in miracle cures – are all based on real people Kimmings met whilst researching the show, which lurches between reality and fantasy in exploring their stories and conditions. A patient with good news launches into an exuberant tap solo, chemotherapy becomes a rodeo line dance with a shoot out, and a lonely lung cancer patient sings a cowboy country ballad.

This is a production that is hard to define, and in part its unlikely combination of form and subject matter is the method by which it seeks to smuggle in its straight-talking confrontation with ‘The Big C.’ The musical interludes work best when they are an extension of the absurd world that grief and fear plunge these people into – when they serve as a projection of their way of understanding their condition. Composer Tom Parkinson has claimed that the impulse to write a musical addressing the experience of cancer came from the capacity of music to create collective experiences. These musical fantasies do just that, emerging organically from the soundscapes of a medical ward (Lewis Gibson’s sound design is stunning) to bring to life the inner world of a sufferer. However, other musical numbers feel gratuitous, existing more to serve the form than the content. It is here, particularly in some of the opening numbers of the first half, where the production veers uncertainly towards student drama.

But if A Pacifist’s Guide to the War on Cancer is somewhat tonally inconsistent, it is a conscious choice from the writers which enables a startling gear-shift for the extraordinary second half. Without giving too much away, it feels more in line with both Complicite and Kimmings’ previous work, and delivers moments of true theatrical innovation. This leads to a beautiful, and simple finale – a second act which fulfils the promise of an honest confrontation with our relationship to illness, and which resolves the contradictions of the first. A Pacifist’s Guide to the War on Cancer is not a wholly satisfying experience. But it undeniably does more than any other piece of theatre I have seen to address how we imagine and experience illness.