A well-acted rendition of the original pirate yarn that forgets to be rollicking when it gets bogged down in dialogue.

This summer, Iris Theatre weigh anchor, raise canvas, and set sail for their latest outing in the grounds of St Paul’s Actor’s Church: R.L. Stevenson’s swashbuckling classic, Treasure Island. In this family-friendly show, we are guided by the bright and talented cast (bolstered by an armada of friendly volunteer ushers) between five vibrant sets, each a staging ground for a different part of Jim Hawkins’ adventure. Expect sailing, shanties, sword fights, and, of course, mountains of doubloons. 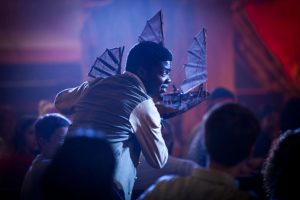 There’s much to recommend about this retelling of the iconic pirate tale. Valentina Turtur’s ramshackle set design works perfectly with Felipe Gomes’ intricate soundscapes to give the audience a sense of their environment. A splash of colour is added to the mixture by the costumes, designed by Maddy Ross-Masson, each of which compliments its character perfectly. There are also some outstanding performances. Nick Howard-Brown’s confident portrayal of the foppish Squire Trelawney and Dominic Garfield’s slightly Jack Sparrow-esque brigand Black Dog bring much-needed laughs without hogging the spotlight, and Adrian Quinton plays the stern Captain Smollett with just the right blend of charm and gravitas, although his romance subplot with Mrs Livesey (Rebecca Todd) is cursory at best and feels tacked-on and half-hearted. Harold Addo, in his professional debut as Jim Hawkins, provides a somewhat mixed performance, at times portraying Hawkins’ wide-eyed thirst for adventure with impressive sincerity, and at others sounding rather forced. Further coaching in a convincing Bristol accent with Iris’ accent coach, Jonathan Mulquin, may have helped his delivery sound less stilted.

The director and adaptor Dr Daniel Winder’s script, too, has its moments. Some of the gender imbalance of the original story – described by Stevenson as “a book for boys; women are excluded” – is elegantly redressed through the characters of Mrs, rather than Doctor, Livesey and Isabella, rather than Israel, Hands (Anne-Marie Piazza), and there are some lively setpieces, including a well-executed climactic sequence that will come as a surprise to those familiar with the book. However, it is mainly in the script that the play’s biggest faults also lie. An issue that becomes immediately obvious is the show’s tendency become a static exchange of rather verbose speeches, something which would be problematic in a family show at the best of times, and which is exacerbated by the locations: an echoey church hall followed by stages outdoors, competing with the distractions of aeroplanes, Covent Garden street performers, clock towers, and capricious British weather. Whilst the children in the audience didn’t seem bored by the play overall, there were certainly times during the talkier sections where their attention seemed to drift. A good story can engage children without hyperactive stage business and constant slapstick, but this production needed much more texturing with movement and humour.

The other big issue arose when the audience was divided into ‘pirates’ and ‘privateers’, going separate ways for the middle section of the story when the characters split up. Whilst it can be difficult to handle diverging plotlines while keeping up the narrative momentum, the way this was done created a twofold problem. Firstly, it meant plot elements from the other thread were often hastily and inadequately explained. Secondly, sitting listening to an expository monologue while being able to hear high-energy shenanigans taking place on the other stage created a feeling that “the other mate’s treasure is always shinier” – or at least that it might have been nicer to have seen the edited highlights of both sections rather than the whole of one or the other.

There are a few other niggling issues besides these structural ones. The show claims to be interactive, which turns out to mean the occasional bit of direct address and shanghaiing a handful of the audience to serve as honorary crewmembers – a nice touch, but nowhere near enough to justify the description. The central relationship between Long John Silver (Dafydd Gwyn Howells) and Jim Hawkins is underdeveloped, a shame not only because it’s a keystone of the plot but also because Howells exudes an avuncular charm that could have made the dynamic very believable. The hot-headed Isabella Hands was a great character and was performed with tremendous energy and passion, but her tendency to lapse into Spanish on almost every line – rather than as an occasional ornamentation – made her dialogue a little tricky for younger audience members to follow, and essentially wasted time. Finally, Long John Silver’s rigid parrot, with its pre-recorded voice echoing out of a speaker on the opposite gunwale, broke immersion and brought to mind images of Monty Python with its (presumably) unintentional mediocrity.

In spite of this, Treasure Island makes for enjoyable viewing, performed with the charm and aplomb that regulars have come to expect from Iris Theatre. No review of an Iris piece would be complete without praising Candida Caldicot’s beautiful musical compositions, performed onstage by the cast, my personal favourite being an extended shanty sung during the voyage by the wonderfully charismatic Anne-Marie Piazza. I would tend to recommend this show to more grown-up audiences, but if your children are young buccaneers enraptured by tales of the high seas, and if they’re happy wading through a bit of inaccessible dialogue, then set a course for Covent Garden this summer holiday.

Treasure Island is playing until the 28th August at the St Paul’s Actors’ Church in Covent Garden. Evening performances start at 7.00pm (Wednesday to Saturday & Tues 2nd Aug), while matinée performances start at 2.30pm (Monday, Thursday, Saturday, Sunday).Tickets can be booked at http://iristheatre.com/event/treasure-island/.