Review of: The Mission

Produced by:
The Outbound Project

Price:
£6-11 depending on the performance. 2 for 1 tickets are available on the 8th and 9th August
Reviewed by: Olivia Coxhead

As a debut show, The Mission is commendable and indicative of exciting things to come from The Outbound Project.

The Mission, the debut show of physical and visual theatre company The Outbound Project, follows everywoman Jenny (played by the appropriately astronomically named Stella Blackman) through her transformation from typical young woman to pioneering space explorer. In 2057, the Earth’s resources are rapidly running out, and new opportunities and habitats are desperately needed. Jenny is singled out as the planet’s last chance to find a new home, and has to single-handedly bare the pressures of her rigorous training and the world’s attention. 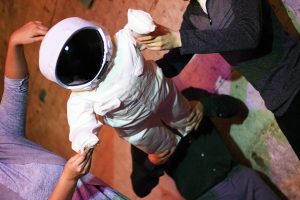 he initial story set up borrows somewhat from The Hitchhiker’s Guide’s principle Arthur Dent character, as a singled-out but entirely average space traveler, but The Mission has its own distinct commentary on what post-2000 space travel would look like. Their unique vision anticipates the death of the scientific and technological focuses that typified the twentieth century space race – this is space travel for the post-millennial generation, and run by a PR-heavy corporate company. With charismatic company leader Mr Walker calling the shots (played wonderfully odiously by Martin Chime), the mockery of the Silicon Valley start up culture is inescapable and is a great addition to the traditional space travel narrative.

With their black box set and simple costumes, the design of The Mission is kept minimal; handheld props and lights are few in number but limitless in imaginative reincarnations (as machinery, reaction tests and even stars). There are no spare parts, everything has a clearly thought through, and at points beautiful, purpose, and the visual signature of this play is strong. However, the extended movement scenes could at points benefit from similar streamlining; in the regular montages and sequences without dialogue, the play has a tendency to drag slightly with the pressure of trying to show too much. Some of the micro-scenes don’t push the narrative on as firmly, and as such could be sacrificed in pursuit of more polish and purpose.

Christopher Yarnell, as bumbling boyfriend Tom, particularly shines in his descent into righteous anger as the one left behind on Earth. Jordan Turner’s ensemble anti-gravity movement is wonderfully supported by base Lucy Bishop, and the cast collaboration is professionally tight in these moments. Stella Blackman’s arc, however, is cut short by the script, which spends too long on the build up of Jenny’s training, and consequently the climax and resolution of the show is over too quickly, robbing Stella of opportunity to properly develop her character’s feelings. The audience feel as though they’ve missed a significant portion of her development, and the conclusion lacks potency as a result.

As a debut show, The Mission is commendable and indicative of exciting things to come from The Outbound Project. Already recipients of the Les Enfants Terribles Partnership Award, in collaboration with Greenwich Theatre, and marked as one to watch, this company are clearly setting out on a journey that deserves attention. A strong and accomplished piece, The Mission may be a small step now, but the Outbound Project’s giant leap is doubtless on the horizon.

The Mission will be continuing its run at the Pleasance Courtyard in Edinburgh until 29 August, with daily performances at 2.20pm (with the exception of 17 August, when there is no performance). Tickets can be purchased through the Edinburgh Fringe Box Office here.

Devised by the company