Review of: Adler and Gibb at Summerhall

Few writers can turn the microscope so efficiently onto their own craft like Crouch can, and Adler and Gibb therefore resonates more than most in the same deconstructive field.

Tim Crouch is always a tough cookie to crack when it comes to review writing. The man not only interrogates form, but also interrogates his own interrogation of that same form, in a body of work that seems to have developed into some woven, interconnected tapestry of theatrical deconstruction. Adler and Gibb, in spite of a few faults, very much continues in the same vein set by a few of Crouch’s more contemporary works, providing a deeply rich narrative tale that drips with deeply theorised meaning – as is entirely to be expected.

The play concerns the legacy of Janet Adler, an artist that, in the last half-decade of her life, went about dismantling the vast majority of her installations and retreating into obscurity alongside her partner Margaret Gibb. Gibb, alone now in 2016, is set upon by an actress (billed to play Adler in a new film) alongside her life coach / lover. From there, the play unravels and unfurls its message – like some form of theatrical pinecone in a warm and dry environment. 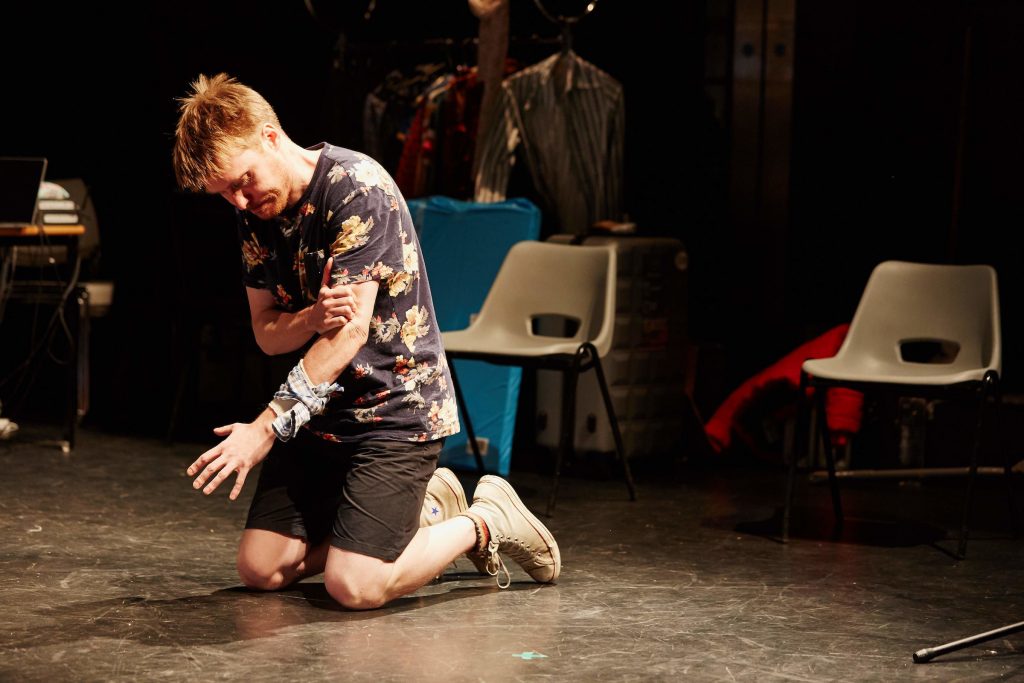 The staging is, as expected, inventive – a young girl, neutral expression, is guided through a set of headphones across the stage regularly, serving as a proxy actor, stage manager and dog stand-in at various intervals. A clear callback to An Oak Tree, here the headphones seem to be more of a practicality – a way of allowing an actor to move across the stage without being wholly acknowledged or stealing too much attention. The two central actors, though beginning as static, unchanging voices, eventually become physically present, and the play is rendered more and more natural until, by the end, the play gives way entirely to a short film segment. The play seems to owe something to Renee Magritte, especially as various props, including a shotgun, a spade and a hammer are all traded for other props, including lobsters, paper windmills and foam buoyancy aids.

If anything, the play is a clear successor to The Author, both discussing the ways in which the artistic world has a determined tendency to appropriate and consume, often without pausing to think about the personal and emotional consequences of actions. Or, if they are thought about, they are deemed irrelevant.

Few writers can turn the microscope so efficiently onto their own craft like Crouch can, and Adler and Gibb therefore resonates more than most in the same deconstructive field. This process, however, leaves the audience somewhat absent throughout, far less able to engage or interact. We are rendered passive, voyeurs to the spectacle. Maybe this is Crouch’s point – all we do is spectate, never interfering with the immoral acts perpetrated by actors in the name of their craft. A damning indictment all round, for an afternoon at Summerhall.