A thriller about a paranoid surveillance state, Foresight draws parallels with modern invasions of privacy... but falls short of drawing the audience into its world.

A stark, austere surveillance state, in which cheerily sinister government videos remind people to tattle on their neighbours and fedora-wearing secret police lurk around every corner. Kidnappings, maimings and oft-fatal ‘processings’ befall those stepping out of line. Shadowy élites puppeteer from behind the scenes with espionage beyond normal human understanding. If the world of Synchron Productions’ Foresight sounds a little too familiar, perhaps its parallels with modern censorship and state intrusion into private communications are hitting home. Or perhaps you’ve just read 1984 lately. 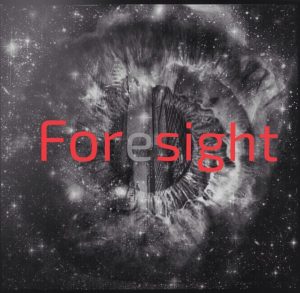 In the style of a mid-twentieth century political thriller, Foresight tells the story of an ambitious journalist (played by Jennie Rawling) and her quest for the truth about a world where nobody is to be trusted – by order. With an old-timey propaganda video opening and a stylishly-designed, smart-shabby stage aesthetic designed by co-writer and producer Amy Liette Hunter, the play does a good job of visually establishing the dystopian nation of Albion. A moody cello underscore – also designed by Hunter – helps create a sense of unease at certain moments, something which fitted the play’s ominous feel so well that it was a shame that it wasn’t used more, perhaps to deepen the emotion of the inherently less naturalistic flashback sequences, or as a way of evoking the otherworldly dread of Pythian Vanga’s (John McLear) prophetic visions. These sections tend to feel somewhat underdeveloped, with the potential for some quite wrenching scenes not being fully exploited by stagecraft.

As it is, most of the atmosphere must be evoked by the cast. Sally Reichardt and James Abery inhabit the setting gamely, slipping in and out of a variety of roles and distinguishing them nicely, with Reichardt’s neurotic paper-pusher Meredith and Abery’s menacing Civil Officer coming over particularly vividly. Jennie Rawling’s protagonist, Charlotte, is energetic and likeable, while John McLear’s resonant voice and excellent use of stillness add gravitas to his blind prophet character. Rather appropriately, the director and other co-writer, Andrew Barton, makes a cameo at the end as a powerful member of the Establishment who appears to have orchestrated many of the play’s events. Each actor has clearly worked hard refining their own, individual performance. Where the cracks start to appear – alas, to the production’s noticeable detriment – is in their interactions with one another. At many points in the play, characters fail to bounce off the energy and tone of whoever they’re responding to, flattening what should be a building sense of dramatic stakes and making it feel as though they are simply taking turns to say their lines.

This occasionally bleeds out into the longer speeches, too. Pythian Vanga’s repetitive intonation while reminiscing could lead one to think he was just reciting a story from memory rather than responding to a line of questioning, Charlotte Foster at times interviews him with a tone and body language that suggests she’s not overly interested in what he’s saying, and we never truly sense the intimidation of the authoritarian bureaucrat we meet at the end. The overall result of this lack of dynamics is the nagging feeling that the characters don’t sincerely believe in the world they inhabit. What should be expressions of shock come over as bemusement, anguish as exasperation, fear as passing awkwardness. For a thriller that relies on constant, mounting paranoia in which all characters are constantly under threat, this is damaging indeed. There are certainly moments where the actors give us a strong sense of the world, but immersion is like glass – once broken, it’s very difficult to fully restore.

Part of this can be attributed to the script. The dialogue is solid, albeit with the odd dip into cliché, and the writers interestingly subvert the usual social conservatism of dystopian fiction with a kind of enforced tolerance, something which is considered briefly by two characters but not really examined in depth. However, we’re not provided with certain bits of context that would make it much clearer what kind of lives the characters were leading. Various people allude to ‘The Resistance’, but what is its actual aim? What kind of people join it? What has it done? Is it even real? The state is shown to have more obvious control of the people than its real-world counterpart. Is it a dictatorship or are there elections? What’s Albion’s standing in the world? And, as the director’s note draws a direct parallel with corporate surveillance through internet records, what part does big business play in this police state? Clearly, a one-hour play couldn’t hope to explore all of these questions in detail, nor should it, as a narrative driven by an individual’s story. Nevertheless, an awareness of them in the show’s dialogue and performances would really assist our understanding how we’re being asked to relate to this alternate England and the people who dwell in it.

Synchron Productions have real potential to present imaginative, thought-provoking work. The writing had glimmers of something gripping, and there was real talent at work in the actors’ conceptions of their characters. What the company needs now across the board – in writing, directing, performance and design – is the extra push of energy, attention to detail and real commitment to the imaginary world of the story. Once they’ve achieved this, Synchron will have the ability to transport their audience into a fictional reality. As it is, Foresight presents interesting questions, but seems to never quite convince itself that they’re worth answering.