Review of: The Royal Opera Presents: The Importance of Being Earnest - Barbican Theatre

Produced by:
The Royal Opera

A wonderfully chaotic adaptation of a classic, 'The Royal Opera Presents: The Importance of Being Earnest' is a gloriously absurd production that presents a new approach to Wilde's beloved farce.

The Importance of Being Earnest by Oscar Wilde has entertained generations of audiences with its ludicrously farcical comedic style and crisp, razor sharp dialogue; only last year did David Suchet’s triumphant performance as Lady Bracknell grace the Vaudeville Theatre stage, earning not only critical praise and emphatic applause, but also a Best Actor in a Supporting Role nomination for this year’s Olivier Awards. With that in mind, does The Royal Opera and Britten Sinfonia’s production of Gerald Barry’s Grammy-nominated interpretation equal such a recent adaptation? To put it simply, no – but that is because the two shows are incomparable. The Royal Opera Presents: The Importance of Being Earnest descends further into outrageous chaos than dared possible by either the source text or the performance medium, and the result is a production that revels in delirious absurdity. 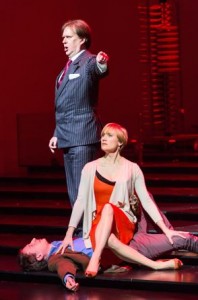 The majority of the cast are seasoned performers of this Wilde/Barry amalgamation, but all manage to execute the irregular rhythms and whirling melodies of Barry’s libretto with an air of apparent ease. Not that anyone would be able to notice if a measure was skipped or sung incorrectly, such was the dizzying effect of the musical arrangement.  However, Barry’s score is not simply confined to normal operatic conventions – the musicians actually take part in the narrative. Expertly performed by The Barbican’s Associate Ensemble Britten Sinfonia, the music takes on a character of its own, shaping and contributing to the responses of Wilde’s principles. For example, as Gwendolen and Cecily, played by Stephanie Marshall and Claudia Boyle, have a particularly heated discussion concerning their respective Ernests, musicians fire pistols and smash plates directly onto the stage, punctuating every syllable of dialogue with an almighty racket. This non-diegetic representation of their increasing agitation is jarring, but works wonderfully with the oddity of their situation. If any of us thought that our betrothed was engaged to another woman, I am sure we would hear the sounds of smashing plates and gunshots as well.

But it is not simply Barry’s music that is vigorously energetic – Director Ramin Gray and Choreographer Leon Baugh devise movement sequences that inject fiercely sporadic energy into particular sections of Wilde’s dialogue. As Lady Bracknell advises John on how to improve his social station, John (played by Paul Curievici) began to tap his feet in rhythm with the music, and Lady Bracknell (played by Alan Ewing) quickly followed suit. Their dialogue became a repetitive outburst of overlapping speech and exuberant dancing, which became more outlandish as the scene continued. There are a lot of moments that echo a similar physicality throughout the production: actors fall down and roll across the staggered staging; muffins and teacakes are thrown in fits of impassioned fury as John and Algernon quarrel over Cecily; and even more plates are sent crashing to the ground. 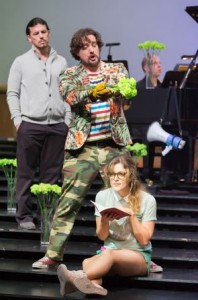 Though one cannot imagine members of civilised Victorian society engaging in such reckless behaviour, these are no longer Wilde’s characters – they belong to Barry, Gray and Baugh, whose fevered physical expressions are, for the most part, a perfect representation of the meaning behind Wilde’s witty rhetoric. However, there are moments when this energy became too exhaustive, too overused, and perhaps a bit too absurd. For example, there is a moment when Miss Prism and Cecily, while discussing the nature of her current educational studies, become preoccupied with a particularly evasive bee. Though it is another opportunity for a member of the orchestra to demonstrate their excellent musical ability through diegetic sound effects, the scene is far too long, and as Cecily takes out a butterfly net to catch it, the moment seems to lose focus and in its length becomes somewhat overindulgent.

The Royal Opera Presents: The Importance of Being Earnest is an almost overwhelming piece of theatre – its bright colours, loud noises and exuberant physicality inundate the senses at every opportunity, but for the most part, this suits Wilde’s farcical comedy. Paul Kilbey, Content Producer for the Royal Opera House, states that ‘[t]here is no sense in which The Importance of Being Earnest needs to be an opera’, and I must agree with him. Wilde’s play does not need to be an opera, and although there exists the occasional instance where the production does verge on over-absurdity, I am certainly glad that such a show exists.

The Royal Opera Presents: The Importance of Being Earnest will be continuing its run at the Barbican Theatre until April 3rd, with 7.30pm performances on March 30th and April 1st – 2nd, a 2.30pm performance on April 3rd, and no performance for March 31st. You can book your tickets from 020 7638 8891 or https://www.barbican.org.uk/eticketing/performancelist.asp?shoid=39504.