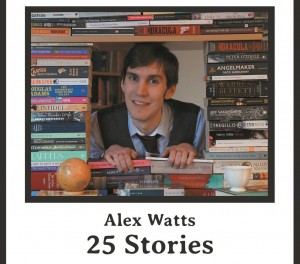 Stand-up sets can often be a mixed bag – sometimes even among the comedy elite. Alex Watts is relatively new on the scene, but his one-hour set currently playing at the Blue Elephant Theatre is a consistently funny look at the way we interact with words, and the way words are purposed to interact with us. The humour never flagged, even if the punchlines (purposefully) did.

Watts’s comedian is a gangly, gallivanting nerd who has worked too long in jobs he does not like, and when he gets the opportunity to share what he loves with an audience, he lights up like an overexcited child at Christmas. Except that this overexcited child is now majorly jaded, sarcastic, and irreverent. Despite the fact that on this night he was accidentally ‘cosplaying a Tory’, his version of the dystopian future – as expressed at the set’s opening and ending – is where lads take over and banter reigns supreme. He has slight obsessions with today’s fragile masculinity, yesterday’s Victorian and post-War fragile masculinity, bad punchlines, and formulaic stories.  He does not abuse his audience for laughs, instead picking ever-changing favourites from those who laugh the loudest

The idea of the set is focused around his love affair with books and the stories they tell, while also lovingly lambasting the modern bookstore and soul-sucking office setup. He attempted to out-do Hemingway’s six-word story, told a three-part tale of punctuation wrangling, read his outrageous three sentence fan fiction, created an allegory for world peace from horses and pubs, and utterly deflated puns in a mock ‘ITV 5’ historical drama. He keeps coming back to the illusion of a linear narrative (another one of his obsessions) and uses his serialised gags to tie his show together, while loudly commenting on this fact. This absurd meta-theatricality was the perfect addition to his awkward persona and served to enhance the humour.

While Watts is a natural in front of the audience and completely lacks any novice nerves ­– possibly due to his strong comedian’s stage presence – I would have loved to see a greater range of topics roasted by him. That said, Watts perfectly judges the length of this set and is entirely clear in focus, leaving the audience completely satisfied but never letting them wish for its ending – a very delicate feat for such comedians, and one he managed incredibly well.

I was entirely impressed with Watts’s screwball storytelling set and would definitely seek him out in the future should he extend this show or make a new one. This promising young stand-up act is definitely one to see.

25 Stories plays at the Blue Elephant Theatre in Southwark (near the Oval tube station) from 17th-19th March. Shows are at 8.00pm except for Saturday 19th at 8.30pm. Tickets are £10 for general admission, £8.00 for concession, and £7.50 for Southwark residents.