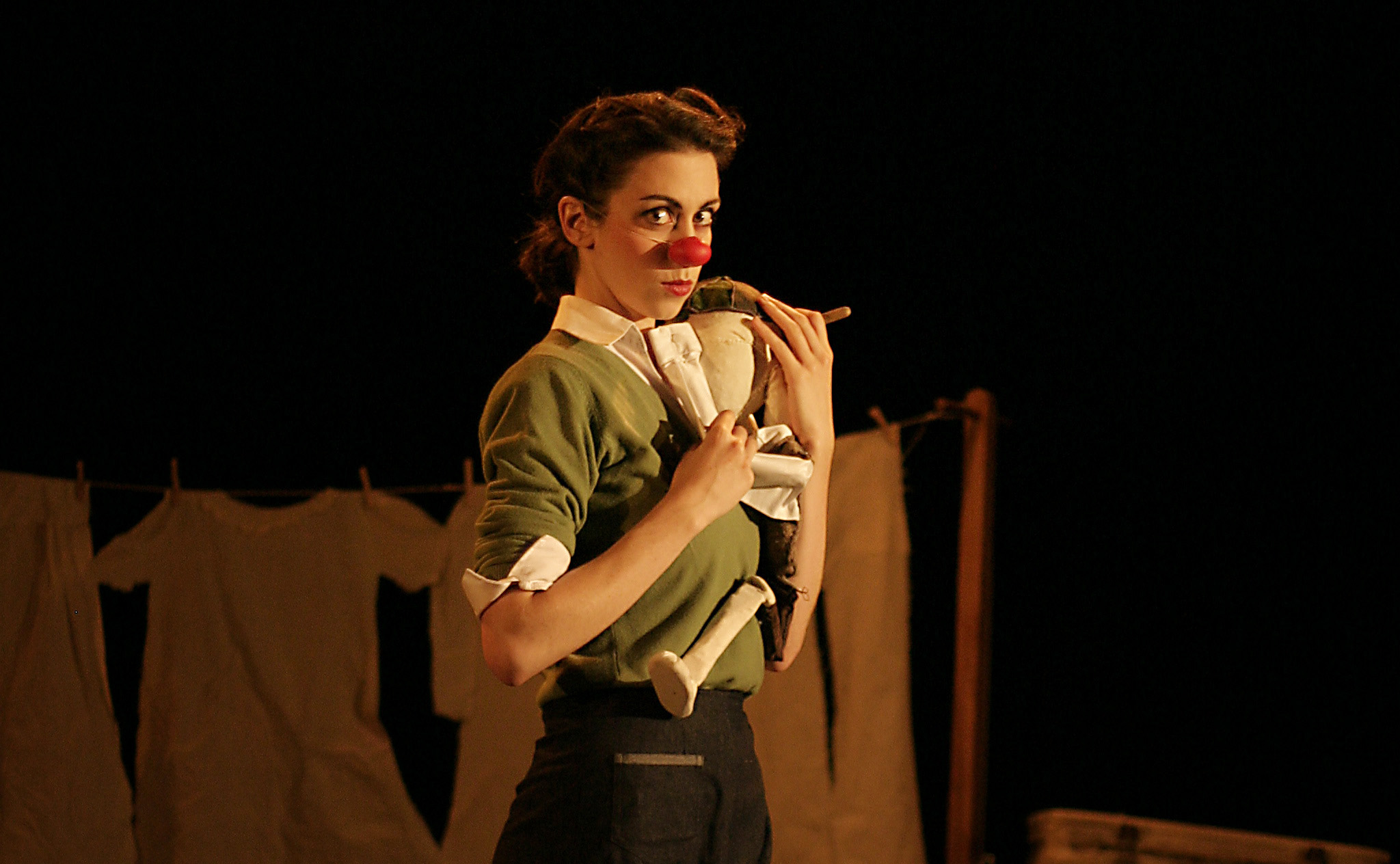 Leela Bunce in Finger in the Pie’s One Woman Show Waiting for Stanley.

Where Are The Women In Theatre? It’s a question many have been asking, and one that evidently still needs answering. 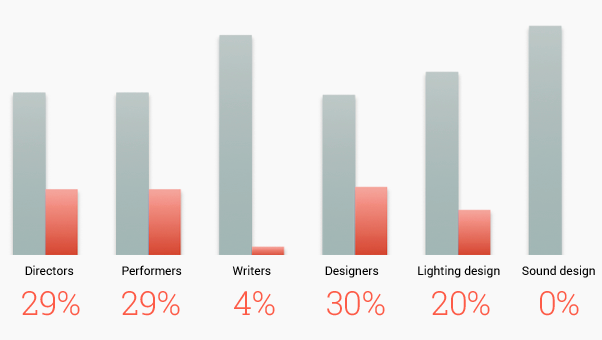 West End Productions: Of the 20 plays being performed on the West End Saturday 13th September 2014, women accounted for (in red)

Women are still lacking in variety of employment across the theatre industry including, lead acting roles, commissioned writers, managerial, technical and production departments. In discussing this important issue I took a personal journey and reacted to my own aspirations as a theatre producer at an early stage in my career, oh and as a woman. In light of this I decided to concentrate my efforts into asking a niche, but ultimately critical role in the theatre – the producers.

I began with finding the research conducted by Tonic Theatre titled Advance Project (launched 22nd September 2014). As a recent study I was both in awe and a little disappointed by the figures that were published.

I read these figures with incredulity – How? When? Why? These figures made me question if I should, as a woman, pursue a career in theatre. So, I decided to interview women already working as producers. What was their experience and advice?

I met with Becki Haines, Executive Producer for Coney, Producer for Bootworks and Co-Producer of Total Theatre Awards, and presented her with some of the facts I have shared above. Becki shared further insight into some other areas of working in the theatre that she had also recently discovered, “Just the other day I learnt that at the moment 31% of published playwrights are female, as opposed to 30% ten years ago”.

A 1% increase a decade for female playwrights is the definition of a kick in the teeth. This is also flagged up in Tonic Theatre’s advance project, outlining further insight on figures like this.

Research into playwrights sampled through 12 London theatres’ productions across 2013 and split them into main spaces and smaller spaces.

Although not the ultimate focus of my research, these figures evoked a factual insight that women were getting their feet through the door, but not yet entering the room.

“I think we still have the inheritance of male stories seeming more important…there seems to be some kind of idea that women write small stories, or their issues are small or too domestic, which I certainly don’t buy and I don’t think that anyone thinks in a conscious way. Certainly amongst younger people [working in theatre] there are more women than there are men”.

So our problem could be a hang up of the past, women are still building momentum in refining and showcasing their talents. What is the most effective way of levelling this out then? Some would suggest a recruitment quota, enabling more women to work in the industry in order to create a more balanced and therefore fair environment.

Rupert Christiansen discusses the ineffective nature of quotas within tackling the issue of the lack of women on stage, “I was rather depressed to see that wonderful director Phyllida Lloyd asserting in an interview…saying that she won’t consider directing any project unless “at least 50 per cent of what’s happening on the stage or screen is a woman’s experience”. That sort of thinking is utterly beside the point – in fact it merely reinforces gender stereotyping by reducing the complex question of equality to a matter of statistics and quotas.” (Telegraph, Oct 2014) The Advance Project agrees with this point, to an extent, and provides a manageable on-going solution:

5. Consider making gender equality a regular agenda point in staff meetings or Board meetings. It’s a good way of stopping the matter slipping out of focus for an organisation, particularly during their busiest periods.

When I first read it, it sounded like a bit of a conceptual task for a large theatre organisation. But in consideration of the evidence, it’s a manageable model that staff on recruiting levels can certainly address. But how do we create the space for this to work? Isn’t it about the best person for the job? I continue with Ashleigh here, asking her response to this strategy.

“Sometimes it’s about individuals helping each other out and networking and just making sure we support each other. It strikes me that there can be an image of theatre as an aggressive industry, and I don’t think it needs to be. From my experience Stage One is one of the most open-armed organisations; they share so much with you, which I think shows that it’s actually not that useful to be aggressive or to close doors to other people, because it doesn’t make anything any stronger.”

Ashleigh makes an interesting point here, and directly from her experience. Maybe it’s not about quotas and setting further boundaries on recruitment within theatre, it’s about employing a new mind-set and openness to helping people when they need it.

Another large issue within the topic of women in theatre is the babies thing, you know it, you want to start a family but when is the right time? How will you continue or get back to work? Is it even possible? It’s a question that runs I believe every job a woman can possibly have, but in this context I discovered some insights through current examples of the women in theatre who are doing it. Back to Becki here as she tells me about how some women are making it work.

“I met an Artistic Director who had just had a baby, and because she makes work with children, the baby just went to rehearsals and actually that was a brilliant thing because if the baby isn’t listening they were doing something wrong.”

Becki makes a good point about how some people manage to be the working mother. She also outlines freelancing as a positive way to work from home and still be contributing towards theatre companies. She also discusses another example in which she met a producer new to freelancing, who didn’t like to mention her role as a mother. She found it changed people’s perception. Becki elaborates,

This example again dwells on the concept of changing your outlook and assumptions of individuals in what are deemed to be as compromising circumstances. In this instance, being a mother has benefited this person, although everyone else like to believe it has reduced her capacity. This topic has been a very old argument to prevent women working and it is now illegal to have that view. Childcare arrangements are beginning to improve and the experience of being a parent broadens the understanding of the human condition, which will naturally pass on to the work place.

The real issue comes down to grassroots, as it always does, and the way in which we can support the next generation of women aspiring to work in theatre at a higher level. Becki suggests,

“If we are not nurturing them now, [women] won’t suddenly appear at the top in their forties. I don’t think we deserve to have women running buildings in twenty years time, if we’re not nurturing them now. It stems from the argument in the press about education in the Arts, saying how the hell are we going to have brilliant artists in twenty years time, if we’re scrapping their education now? We need to be investing at the roots in order for things to flourish, and if we are not doing that, then it’s just not going to happen”

Some really interesting perspectives on what the future for women in theatre looks like. With Emma Rice at The Globe, Vicki Featherstone at The Royal Court and Jude Kelly at The Southbank Centre, are women running big, established theatres in London right now, and hundreds of successful appointments for women in the last three years, the future is bright. I would like to believe the idea that our generation is just catching up, although if we aren’t supported – how on earth will be make it?

Myself, Becki and Ashleigh are in our twenties, and therefore have the prospect of making leaps in the next two decades to change the face of theatre at the top. I think it’s achievable, but involves a gradual progression and collaboration with the way theatres work now. We need a supportive atmosphere that helps all individuals willing to go the extra mile or bring the next big idea, to nurture their progression. And as women, we can only work harder to slip through the net.

I will leave you with this thoughtful quote,

“You’ve got to give women the confidence, the space, the time and the authority to make work. And you have to leave space for them. You have to make space. I think that men can still find it surprising and difficult to deal with that notion of making space.” – Jude Kelly (Jan 2015, The Stage)

Hello I'm Hannah, I am an aspiring producer looking to collaborate on productions in London and South East England.@hannerturkReviewsMy Thoughts On....various plays from past and present that I have seen. I am no real critic, but I love theatre and believe collaborations thrive with a little constructive criticism...right?