Review of: Between Worlds

This is what art is for.

Mark Shenton said it first, Between Worlds seems more oratorio like in style than operatic. A piece about 9/11 imagined through the eyes of five characters stuck together in the North Tower facing certain death, its exploration of all those operatic themes- tragedy, loss, courage, healing and love is wonderfully, magnificently understated. It is not particularly dramatic- Gotterdammerung this isn’t another reviewer has said (and neither should it be) and its most dramatic plot point- the plane flying into the tower- is an event made strangely distant by ominous sonic underscoring. 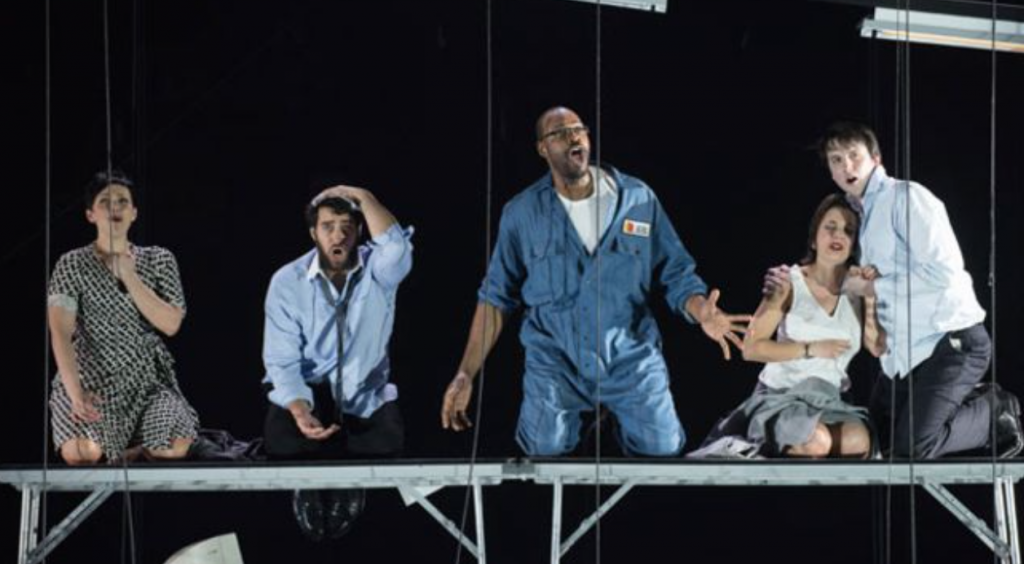 And if people are hoping for spectacle or political argument, they will be disappointed. This work directed Deborah Warner, and created by first timers to the art form composer Tansy Davies and the librettist, poet and writer Nick Drake, is all about those smaller moments between people, that when rearranged into a different framework created by extreme situations, become suddenly colossal. If it were in another context, and if this weren’t such a Requiem for those that died that day in such appalling circumstances, then this would be a paler version of a Robert Holman play but for mezzo sopranos and countertenors.

As it is, over the course of 90 minutes, we learn about the tangled lives of the five- the Janitor (Eric Greene) the archetype who turns out to be the spiritual guide, a sort of Charon, who is there at dawn and would rather stay a little longer than go home to stare at a wall, a Realtor (Clare Presland) who left her young son without saying goodbye, a woman (Rhian Lois) who wanted to stay in bed with her lover but came to work instead, a business man (Phillip Rhodes) too afraid to ring home to his wife to say goodbye because he is having an affair, a young man (William Morgan) afraid of heights and longing to talk to his mum. Above them, at the top of Michael Levine’s set which at times sways, judders and groans in the aftermath of the crash, is a Shaman (Andrew Watts) there to remind us of a world hugely divided and whose guttural utterances could be a pre warning of not just 9/11 but all that is to come after it, which we of course now know and still yet can’t see the end of- if we ever will. Below, on street level, are the Chorus who represent the others and us, their variations on a single melodic theme a literal tower of Babel.

Michael Levine’s set too, cleverly echoing the wires of the tightrope walker Philippe Petit who walked between the Two Towers and performed there in 1974, becomes gradually skeletal. The vertical wires are there to hold up the building, they are there to support bodies and souls (the window cleaner perhaps or even Petit himself who seems to be floating in space at the beginning) and  take them away again (beautifully so at the end of the piece). The wires also represent wires of love, the work’s biggest thematic concern, along with its main desire, which is to initiate the mourning process. Video work by Tal Yarden is also understated and poetic, his tapestry of New York’s sunrise impressionistic and made into mosaics by the pieces of paper that later form the helpless messages sent by the dying to those they would never see again. The many pieces of paper survived of course, when the people did not.

In the program notes, there is an excerpt from Darian Leader’s book The New Black: Mourning, Melancholia and Depression. In it he details Freud quoting Frederick the Great on how life might be made more bearable by each person inventing a way to save himself. In other words art, culture is the only thing that can save us and can offer, as Keats says, ‘a partner… in sorrow’s mysteries.’  This is the purpose, one feels, of Between Worlds. Others have written that it is not as affecting as it could be (it’s not meant to be sensual though) there are thoughts that question the morality of making a work like this in view of America’s own murderous acts, and that also Britain somehow sees it as its own tragedy ( I wonder). But firstly, a nation and its tragedies cannot be judged by its government’s actions. Neither is there a competition to have the worst atrocity, and how can there be national ownership of it either? Let’s not define our humanitarian crises by nation. When events like this happen, whether in Lampedusa, North America, Chile, France, Nigeria and so on, we all own them. And it is not that some should be mourned more than others, it is that all should be mourned in such a way as this. This is what art is for and we can’t afford to get snobby about it. Between Worlds is purely cathartic and that is it and what is wrong with that? And if some were more moved than others, that can’t be helped. But that is the nature of mourning I think. We can’t all cry the same amount, and sometimes, we just can’t be affected as much as we would like. But that is no one’s fault.

Mediative and cathartic, Between Worlds continues at the Barbican until 25th April