Review of: Fear in a Handful of Dust

Raw and tragic, should have you talking in the bar and thinking about it for a long time afterwards.

‘I will show you fear in a handful of dust’ reads a line  in T S Eliot’s The Wasteland, written post WW1 and in a fragmentary style that defined the modernists at the time. And it’s hard not to see Sevan K. Greene’s new WW1 play as a reflection of this fragmentation and as the nature of the relationship between India raised officious British man Simon and Irish Nationalist Buck, as they are thrown together in a trench on the end of a sniper’s rifle during the Battle of Guillemont. 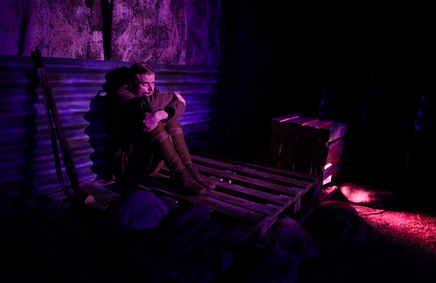 But there is not much war going on in this 75 minute piece. Like violent acts in a Greek Tragedy, it hangs at the end of no man’s land like a continual Deus Ex Machina and time, as in The Wasteland, becomes fragmented and broken only by occasional forays over the top to forage for supplies. When Buck is shot, Greene more than explores the homoerotic tensions between the two men and the interest they have in each other’s bodies, especially when Simon strips to rid himself of a lice attack, paralleling Eliot’s interest perhaps, with the animal deity, vegetation, lust and fertility. In this world the two men find themselves in, there is much eulogising over the mythical green Irish Land, the wings of dragonflies and the gentle Elephants of India- a mythologized utopian idea of the animal universe.

But one can’t help thinking this is not meant to be a totally naturalistic portrayal of life in the trenches. Although lighting from Dan Cornwell is realistic, it conflicts with the traverse stage design from Isa Shaw-Abulafia. The two ends of the trench span the length of the space in a catwalk. One immediately feels that the two men know that all life’s a parade and this sense of inevitability enhances the fakeness of the roles they are playing- the scene where the two  confront each other over their opposing cultural backgrounds and fighting for a country which does not care about them, exposes this more than any other. Jack Morris as Simon is successful in his exaggerated mimicry of a man trying to be a proper English gent though brought up on the ‘backside’ of the British Raj, and Henry Regan has something of the innocent James Joyce Ulysses about him as he drops into the trench at the play’s beginning as if a Dublin Man about town, and out for a gander. One senses that behind his ideal of fighting so his brothers don’t have to, is a determination to help along the prospects of an Irish Republic.

The play and the production has something of Caryl Churchill’s Far Away about it and like the recent production at the Young Vic, would work better in a larger space. But for all its realism, the production, terrifically directed by the Artistic Director of Cog Artspace Jonny Collis, with exceptional performances from both actors, remains an allegory of sorts- we are in the trenches but we are continually taken out of them, or, all life drops into them, including over and over, T. S Eliot, with the men’s repeated pleas for Shantih [“The Peace which passeth understanding”]. And I couldn’t help thinking how differently we think of war and our servicemen now. In WW1  becoming a soldier was not a career choice for many, the sense then was to protect and nurture. Now we live in a different universe and a play about the invasion of Iraq would not have the same kind of innocence we see here. Are we now anaesthetised to the effects of war? one may come away from this play thinking. Do we accept fear more readily, so much so it’s hardly commented upon? The brilliance of this play is to show two men trapped in a nightmare they cannot get out of and they know it. A play about today’s modern warfare, the Gate’s Grounded about a female Drone pilot comes to mind, deals with entirely different issues and experiences- the soldiers of today go into the nightmare with their eyes open.

Raw and tragic, the play should have you talking in the bar and thinking about it for a long time afterwards.

It continues only until 9th  Jan at Cog Arts Space.

Not Suitable for under 14’s