Rupert Christiansen in the Telegraph recently bemoaned the ‘rot beneath opera’s plastered surface’ and a certain kind of opera that is pushing away the more conservative of its audiences by dressing itself up with ‘wanton extravagance and ideological cliché.’ Thank goodness then for the short run of comic opera fused with new writing at The White Bear, produced by Irrational Theatre and directed by Paula Chitty and which my broadsheet colleagues would do well to go and see. 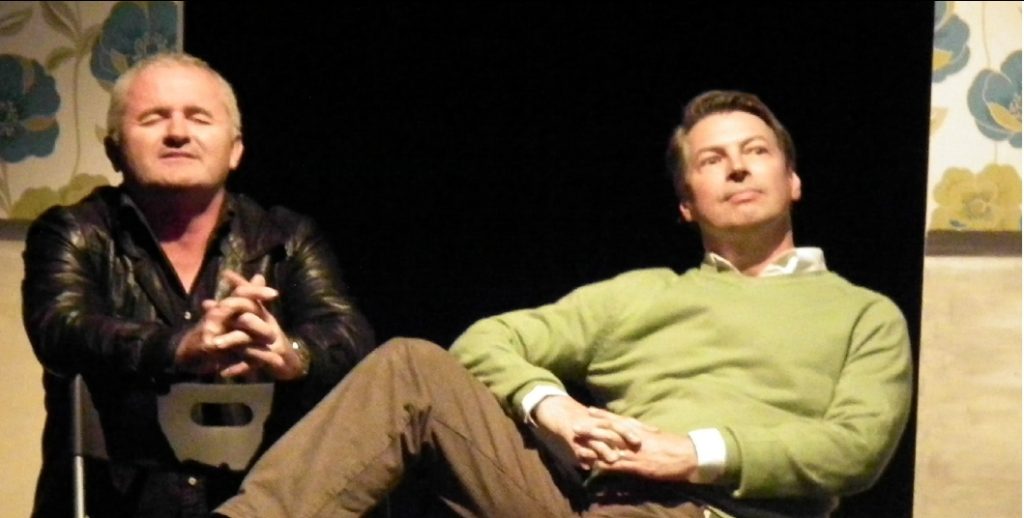 Whilst taking some operas we all know [in this case the much produced Cox and Box, Arthur Sullivan’s first opera] and some we don’t, we do not suffer for a lack of thematic interpretation. Who can fail, whilst watching Cox and Box, a comic tale where two men unknowingly live in the same room, Cox at night and Box at day, to think about London’s horrible housing and high rent situation and not desire at once to rush out and grab Boris Johnson and make him watch the whole palaver, if not to persuade him to enforce better living conditions and the regulation of private landlords? And cleverly arranged around the Sullivan favorite is The Telephone or L’Amour a Trois, by Gian Carlo Menotti, where the tiresomeness of mobiles and our insistent unthinking attachment to them, is cleverly manipulated with some easily recognizable scenarios in this 1940s populist piece, whilst lastly, we are treated to a new play by Joanna Norland, which, through the playful eye of the director, is part Little Britain, part Miranda and part sitcom come musical with its deadpan narrating conscience sung very seriously by Kieran Cummins as though he is a modern day Dante’s Virgil- its only stylistic parallel being Rufus Norris’ successful Vernon God Little some years back.

What a happy treat for opera and new writing lovers who appreciate the mash of sometimes realistic writing with the hyper real transcendence given to us by opera, and how equally wonderful to be able to experience all of this in a studio at the back of a pub, rather than in some huge opera house where the visitor ‘experience’ or HD screenings to cinemas live around the world, seem more important.

And there is one cliché that is immediately exploded, that traditionally opera singers can’t and won’t act- they certainly can and do here and there are some star turns, with Lianne Birkett especially on magnificent and energetic form. Sebastian Charlesworth and Warren Albers pair up wonderfully as Cox and Box too and their trio with Alejandro Lopez Montanya as Bouncer should bring the house down. They are all wonderfully supported by Elizabeth George and pianist Andrew Sleightholme .

The success of this run, which, using mostly the same company, is in rep, is its refusal to get too conscious about what it is doing, or label its works as being ‘tragic’, ‘poetical’ or ‘cathartic’. The achievement lies in its marriage of opposites and extremes- the meeting of new writing with already much performed opera smashes opera’s cosy conventions- and it does it with a laugh too.

Cast for Menotti’s The Telephone

Cast for Sullivan’s Cox and Box