Review of: The Cherry Orchard

Simon Stephens writes in a recent Guardian article that whilst he hugely admires the Chekhov translations by Gregory Motton and Michael Frayn, who translate directly from the Russian, he also thinks they are wrong to assume that pure translations in English versions can exist. Therefore his belief that ‘language shifts and mutates historically as well as geographically’ is perhaps key to understanding Simon Stephen’s latest English language version of the Cherry Orchard, currently running at the Young Vic and directed by Katie Mitchell. 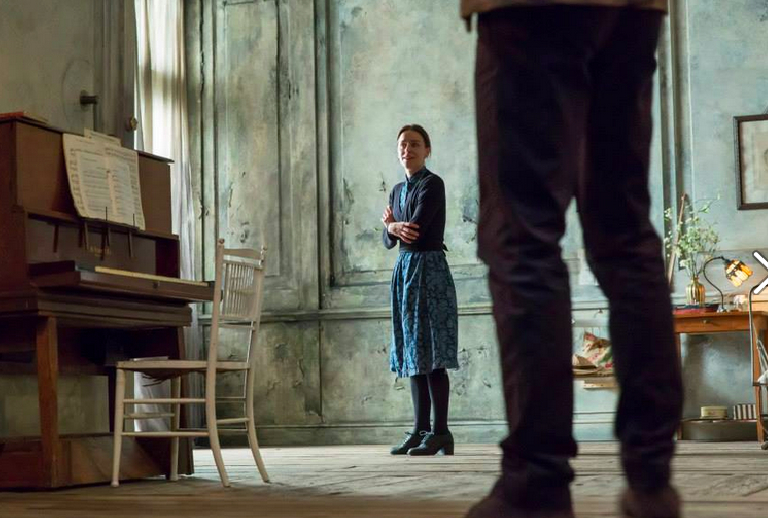 Natalie Klamar playing Varya in The Cherry Orchard at the Young Vic. Photo by Stephen Cummiskey

In it we get a 2-hour version with (refreshingly) no interval and therefore minus some of the expositions that Chekhov included in the four acts, which were typically broken by lengthy intervals, and which so irritated me as a teenager. The effect this has is to cut to the chase, give modern audiences with sophisticated story telling skills the respect they deserve and allows for microscopic detailed character portrayals from a wonderful ensemble that can surely only reach greater heights with each new performance.

And gone, in this pared version, is the sense of materialistic extravagance that Lyubov Ranevskaya and her family cling onto, in spite of their continued debts to the bank which results in the selling of the estate to Lopakhin, grandson of a former serf to Ranevskaya’s father.  Gone too is the exuberance of the Jewish band, which in my version reads ‘should fill the vestibule separated by an arch from the drawing room’ on the day the Cherry Orchard is to be auctioned off- we make do with a limp sounding jamboree in the wings instead. What is the meaning of this muteness? One might think that it serves to lessen the sense of egotistical blindness and fear of the truth that this little assortment of people suffer from- Ranevskaya recovering from a doomed Parisian love affair and the death of her little boy, for which she blames herself and sees as punishment for her sexual misdemeanors, as well as having to deal with the destruction of her beloved family home, Leonid her brother, who reverts to playing an imaginary billiard game at any emotional or logical challenge- mostly from a frustrated Lopakhin (a tic which interestingly Michael Billington refers to as Tourette’s syndrome, a recent modern phenomena though) daughters Anya and Varya, in ill fated love games and rushing headlong into a future which has no place for their last gasp Russian Aristocracy, Lopakhin, with serf roots but a newly formed Capitalist who sees only opportunity in Ranevskaya’s woes, an assortment of bailiffs and landowners and servants and Trofimov, the eternal student marching head strong into what he hopes will be a socialist future- opposing Lopakhin and ‘above love’.

But nothing is lessened; the argument for the retention of Chekhov’s realism and naturalistic tendencies does not necessarily demand that all components of a production should need to follow these stylistic devices in order to play out his main themes. The bare and consolidated staging- taking place in only the nursery, instead of the various locations in Chekhov’s original- by Vicki Mortimer, is an impressionistic delight conjuring up images of the painter Gustave Caillebotte, an artist interested in photographic realism- and somehow bringing to mind The Floor Scrappers, ironically a painting rejected by the Salon for depicting labourers as ‘vulgar’ rather than as ‘rustic’, as was the popular trend- rather like the difference between the harsh and vulgar  modern man-servant Yasha and the more rustic Firs in this play. But it also serves as an appropriate symbol for everything that is wrong with this motley crew- the nursery is the one place Ranevskaya, Leonid and perhaps Anya and Varya too, all wish to return to, as if in some infantile state and preferring to live with their ghosts and memories, and where they can forever peruse the beauty of the Cherry Orchard isolated from, and uninvolved with, an outer world. How a place can have such meaning for a person is rooted somewhere in a human being’s deep need for a sense of community and identity, and the fall out from this, the enforced separation from a place that has such meaning, is one of the ills some of these characters in this production suffer from and from which may not recover- it is not just an obstinate clinging to the old order.

The ghostly presence of the Cherry Orchard itself though is only referred to through James Francombe’s beautiful lighting- its lack is the greater for it in the minds of the audience as they imagine it through the eyes of the characters. The lack of claustrophic set design and the very coolness brought about by the proscenium arch, with blackened walls around its periphery, also give the production a very cold, clinical and scientific feel- almost as though we are in a laboratory and the characters are specimens in a fast rush towards a fate they cannot (or at least as Ranevskaya thinks) change. Indifference, diffidence and self-destruction suddenly become the charged themes, as well as the usual understood thematic concerns of capitalism, decaying aristocracy and the struggles of socialism. Chekhov was never a revolutionary, in the same way that Ibsen was never a feminist, and the production ardently underlines this- over and over, from the comical and invented entrance of the governess Charlotta Ivanovna who walks through the group entirely naked- a modern day streaker- and which remains uncommented upon, to the more unsubtle indifferent ways of Lopakhin who begins chopping down the orchard before the family have even left, we can see this as an accurate portrait of a group of people who live either in the past or the future, but barely the present and are in fact, unable to be really aware of each other. The present is unbearable and there is never really an authentic moment between any of the characters, unless you count that moment Ranevskaya exposes Trofimov’s sexual coldness as mere sham in a hot kiss- the spontaneity of it feeling very modern and transformed from the stage direction of Mme Ranevskaya ‘kissing Trofimov on the head’ to something a lot more suggestive. It could of course though be Trofimov’s kiss of death to a woman who symbolises everything he despises.

There is as much comedy as there is tragedy and the two go hand in hand. Leonid’s paean to the bookcase is a case in point- wonderfully acted by Angus Wright, it is an incredibly funny moment and yet imbibed with Chekhov’s compassion and tragedy. As we laugh we cannot help but cry as we realize that Leonid seems only to be able to communicate with and love inanimate objects, rather than human beings- and that is a tragedy in itself- in the same way his sister fixates on the Cherry Orchard or Firs on the old way of doing things.

What I love about this production and the wonderful acting by all, is some of the things others are lamenting it for. The lack of focus in my eyes becomes a focus on collective concerns, the instabilities of all the characters are somehow more charged and more fully recognized by the consolidated set. No one character is more important than the other and although this may have always been the case, it is not always taught like this, and this production reinforces, by its ensemble work, the focus given to all characters, not just Mme Ranevskaya. But this only deepens Chekhov’s facility for compassion and hopefully ours too. It might be that Simon Stephen’s worries that no one can ever really ‘capture the spirit and depth of the play’- but perhaps that is where its meaning can lie- it is a vehicle through which all flows, through which any era, any epoch of the time it is performed in, can be reflected.