Review of: The Biting Point, Theatre 503 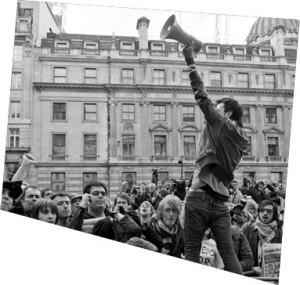 The march is coming. We peep into three lives, each will be on different sides of the law wearing different uniforms. Theatre 503 says of The Biting Point that it is “an incendiary new drama about the hurt that fuels our hate”. This is spot on.

Three characters all seem to have their lives under control, but as clothes are taken off or put on, we discover that their attempts to control the damage around them is leading them to destruction.

Lizzie Roper performed superbly as Ruth, she acts not just with her voice but with every flick of the shoulder and swoosh of the iron. A couple of her sentences were too beautifully crafted, so they sprung out of the mundane setting. I took note that for the scriptwriters amongst us, we should try and say as much as possible using the body: the sniffing of a crumpled shirt, a girl slapping a condom under a pillow, a game of KerPlunk being tidied away over and over again.

Sharon Clark seems to have taken the Nabokov characters and given them a new spin with Dennis, which was fun and interesting. Anna’s bed head sensuality was performed brilliantly by Jessica Barker-Wren. I also liked the way Clark manipulated the fibres of hurt. This was characterised not just in Ruth’s phantom conversations, but also in Malcolm and Wendy’s dynamic. Both tireless actors Charlie Hollway and Sarah Hoare demonstrated energetically the double edged grip of love, through his refusal to hear his sister being called a spaz, even by the beautiful Linda.

All the characters have their own way of taking you, the very close audience, right to the edge of their madness. Then they slide some clothes on and step out into the street.

The Biting Point is playing at Theatre 503 until the 12th of March, check out:http://www.theatre503.com/whatson/detail/233/ for more information